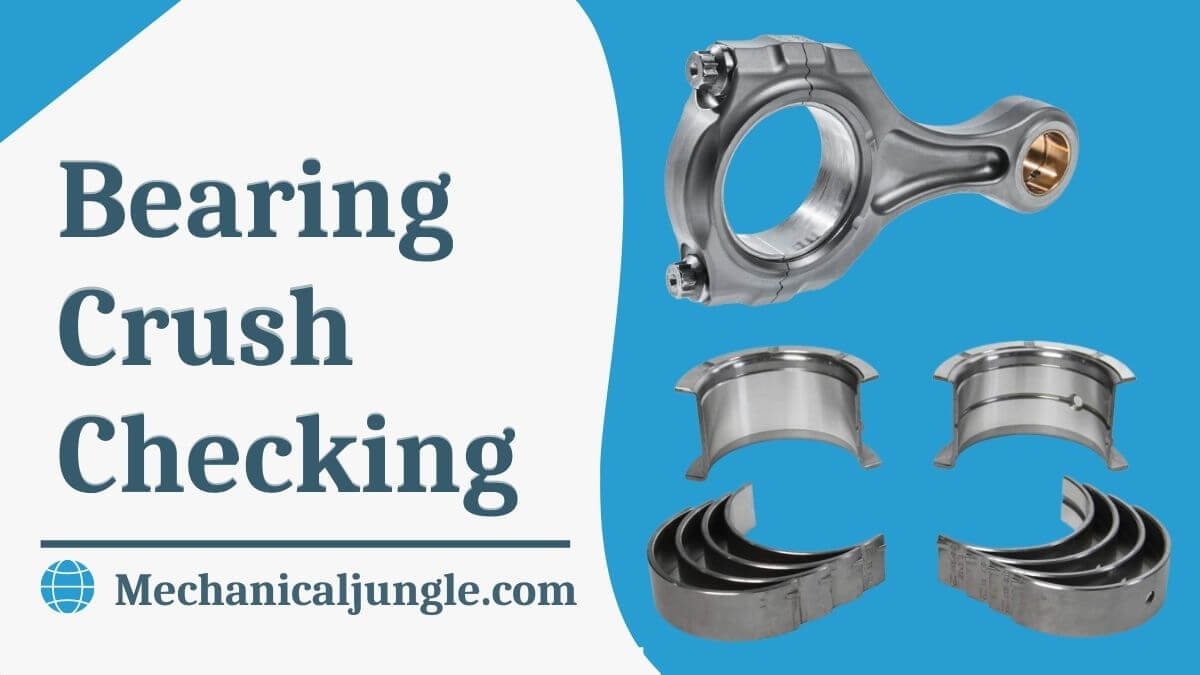 What Is Bearing Crush? 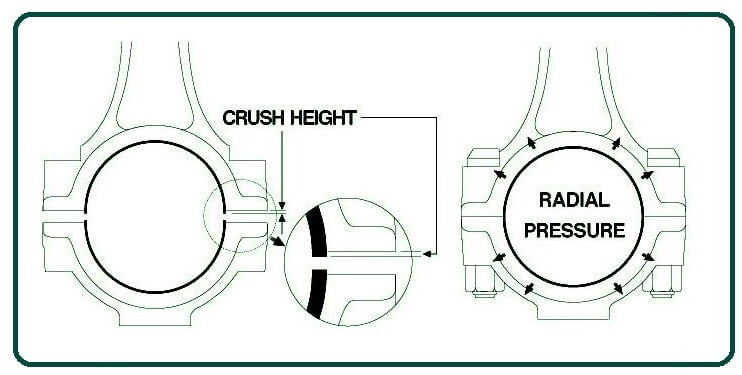 For those who regularly travel on mass transit rail networks such as the London Underground or the New York Subway, the word ‘crush’ will have its own and possibly unpleasant connotation.

Just as tightly packed in a car as another person squeezes before the doors close, the experience, especially during peak travel times, is not quickly forgotten.

But when applied to the technologies of shell bearings, it is not a good idea to ‘crush’; it is absolutely necessary. When adding semi-shell bearings to a cylinder block main bearing housing, even the most visually impaired can’t help but notice that at first sight, the bearing doesn’t seem to fit. Laying the half-shell across the half-moon of the cut-out makes the bearing proud several millimeters after only a slight pressure clip.

Referred to in engineering parlance as the ‘free spread,’ it is designed to hold the shell in place during engine manufacturing. The more observant, however, may notice that even when seated, the shell is still a little proud, and the position remains in place no matter how hard you try.

Believe it or not, I’ve heard of some engine builders actually filing this flush to the level of the clamping face. This is completely wrong. Bearing crush, as it is called, is included for a number of reasons because when clamped together, the compressions in the bearing shells provide highs resistances to the shell turning or progressively creeping in the direction of the crankshafts, as well as supports thin and otherwise flexible structure during use.

Furthermore, under compression, the shell will take the shape of an aperture designed for it, and seated firmly and securely will allow for efficient heat transfer away from its source – that is, the bearing.

When assembled in its housing, this bearing crush typically varies between 0.001 for road transport applications, rising to approximately 0.002 for competing units depending on bearing diameter.

If the bearings are assembled with a very little crush, the bearings will be loose and free to move back and forth in their housing, and after disassembly, highly polished zones will appear on their reverse side and or possibly on the face of the parting line.

Will give Known as bearing shuffle, the loss of radial pressure will result in insufficient contact with the bearing housing, leading to a build-up of heat within the bearing itself and potential damage to the bearing surface.

Although this can result from the incorrect practice of filing the shell flush, more likely causes are insufficient clamp load in the bolt (bolt binding or bottoming in its threads) or burrs or foreign bodies separating the bearing cap.

When the bearings are assembled together, they tend to bend inward around their weakest part due to the pressure in the sphere, giving a lot of crushes.

As evidenced by the polished spheres on the bearing surfaces, assuming that the shells are of correct size and specification, the culprit would otherwise appear to be either over-tightening the clamping bolts or incorrect machining of the bearing housing. 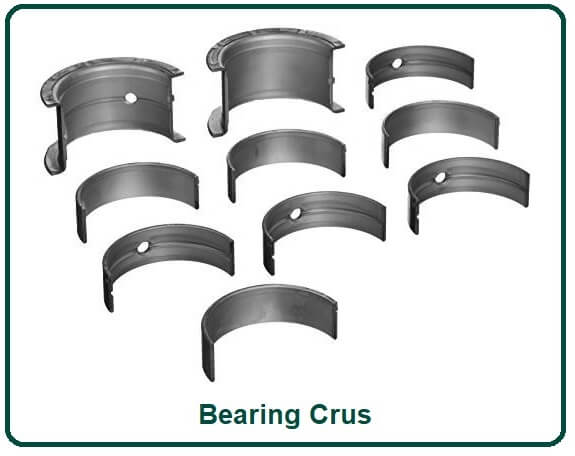 By increasing surface contact between the bearing and the connecting rod housing bore, crushing reduces bearing movement, helps compensate for bore deformation, and aids in heat transfer. In simple words, the bearing crush is what keeps the bearing in place. Think of it as putting a 10-pound thing in a five-pound bag.

Tactile or locator tabs on the shell that the saddle fits are only meant to locate the bearing during assembly.When the crush is perfect, slightly elliptical bearing spheres conform to a perfect circle when rotated into place.

In this way, the crankshaft rotates properly. However, when excessive crushing occurs, the additional compressive force causes the bearings to bulge inward on the parting lines, causing side pinching.

Bearings, on the other hand, are not held securely in the bore as a result of insufficient crush and remain free to move back and forth within the housing.

Since contact between the bearing back and the housing bore is necessary for cooling, this condition means that heat transfer away from the bearing is inhibited, resulting in overheating and degradation of the bearing surface.

An inadequate crush can be caused by an improper attempt to achieve a better fit by filing the parting faces, dirt, or burrs holding the bearing cap open, improperly rotating the fastener during installation, improperly sizing the housing bore, or if necessary, even using multiple shims in the assembly process.

Undo and remove one bolt either one &, starting at 0.075 mm / 0.003 in the feeler gauge, see if the feelers gauge will go into the gap between the cap and the block.

If no gap is visible when the bolt is released, then there are something wrongs with the bearing shells; they will effectively be loose as no bearing crush will be present. Such situations are not acceptable – try another’s set of shells.

If the gap is greater than 0.20mm/0.008 it means that there is too much crush, which is unacceptable as the party line is likely to result in deformation. One set of spheres has to be changed for another. Alternatively, the desired bearing crush can be achieved by mixing and matching existing shells.

Cap, which has a small crush height. Ideally, all main bearing shell combinations are with ‘crush heights’ of 0.10mm/0.004 to 0.125mm/0.005in. If an insufficient bearing crush is present, the result is usually a spun bearing and, if this occurs, serious and costly engine damage will result. 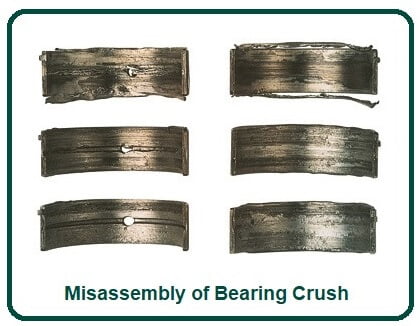 Sometimes, failure is the result of simple installation errors. For example, if the bearing half without an oil hole is improperly placed in a position where the hole is required, that magazine will receive no lubrication. Another type of assemblies error may also be seen.

If connecting rods or main bearing caps are installed in the wrong position or the bearing is not installed securely, the lubrication will be insufficient and cause failure. Careful installation procedures are critical in every aspect of engine manufacturing; careless errors are always costly. 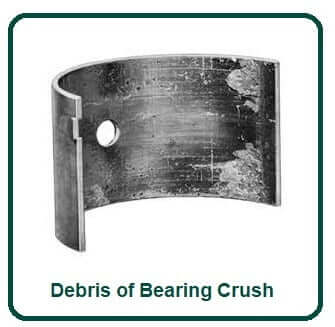 The Debris, such as dirt or dust, can cause considerable damage to the bearing surface. If it is in the lubrication system, the dirt will usually leave peripheral scratches and will often remain lodged in the surface of the bearing.

Always be sure to thoroughly flush the lubrication system before reconnecting the engine to avoid engine bearing damage. If engine parts are not thoroughly cleaned, dirt can also wreak havoc.

The Complete lack of lubrication in the crankcase usually leads to seizure of the engine bearing and complete failure. But, experts say, the more frequent issue regarding lubrication is simply insufficient oiling. The absence of a proper oil film will result in metal-to-metal contacts, sometimes to just one bearing or often to several of them.

When the bearing is damaged by oil starvations, you will get a very shiny surface and evidence of wiping. Remember, oil film failure can be observed on bearings in different ways.

Check for things like a blocked oil passage, a bad oil pump, improper bearing selection or installation, oil seal failures, fuel dilution due to frequent blowing of fuel and air behind the piston rings, foaming or aeration, ironically—overfilled crankshaft by one.

Undo and remove one bolt either one and, starting at 0.075 mm / 0.003 in the feeler gauge, see if the feelers gauge will go into the gap between the cap and the block. The exact sizes of the gap can be determined using a series of feeler gauges.