What Do You Mean by Bicycle? 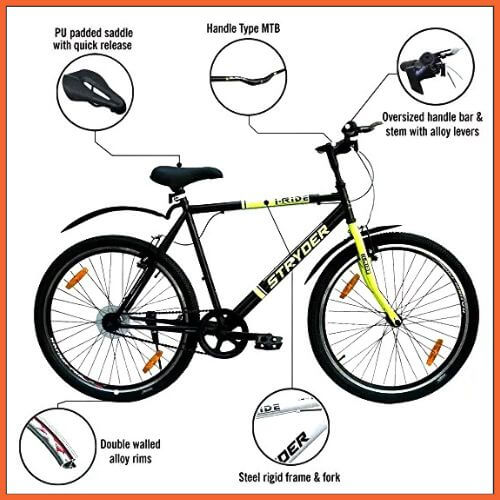 The answer is that the bicycle is a vehicle that has two tandem handlebars for steering, which move the bicycle right and left, and a saddle seat and pedal to push the cycle. A bicycle is also called a bike; it is a two-wheel steerable machine that is pedaled by the rider’s feet.

In a standard bicycle in line, the wheels are mounted in the metal frame, with the help of the front wheel, which is held in the rotatable frock. The bicycle’s rider sits on the bicycle’s saddle, and the rider steers by leaning and by turning the handlebars attached to the fork.

With the help of the feet, the rider turns the pedals that are attached to the cranks and also the chain wheel. The power is transferred to the bicycle by the loop of the chain connected with the sprocket of the rear wheel of the bicycle.

Riding cycles can be easily mastered, and the bikes can be ridden with little effort at the speed of 16km to 25km per hour, which is about five to six times the pace of walking. Yet the bicycle is the most efficient device or vehicle that converts humans’ energy into mobility.

Where Does the Word Bicycle Come From?

The bicycle name came from these two words, the prefix “bi,” which meaning is two, and the suffix “cycle,” which means wheel. In such a way, it gets the name bicycle.

History of the Bicycle

The first similar machine to the bicycle was invented in early 1800. It didn’t have any pedal as a cycle has. In the the1800s, the bicycle’s front wheel was large as compared to the rear wheel. The front wheel size is about 5 feet, which is 1.5 meters tall. The bicycles in 1900 were similar to that of today’s bicycles.

The Main Question Is, Who Invented the Bicycle?

The answer is that no person qualified as a bicycle inventor. At the same time, the credit for having the sketch of a bicycle goes to Leonardo Vinci in the year 1492 in the Codex Atlanticus. The bicycle chains are properly called “bush roller chains”; these chains were invented by Hans Renold and then patented in Manchester in 1880.

Engineering Behind the Working of the Bicycle? How Does It Work?

Millions of people use bicycles for many reasons, like for a workout, fun, racing, and going from one place to another. Riding a bicycle seems easy to drive, but it is not as easy as we think. It is very complex. While riding, both the bicycle rider and bicycle play an important role in this process, which is more science than art.

How does this two-wheel device exactly move from one point to another? The bicycle/bike turns the energy created by the rider’s body into kinetic energy. What do you mean by kinetic energy? Basically, kinetic energy is the effect of a moving object or a particle that depends on its motion and mass.

After this, the energy is used to push or move the bike from one place to another. Momentum and the balance of the bicycle rider help to keep the bicycle stable. The bicycle answers that it is simply the rider sitting on the bicycle seat and placing their feet on the bicycle pedal.

How Is the Working System of the Bicycle Wheel?

The bicycle’s wheels support the rider’s entire weight but are very interesting. If the wheel of the bicycle is made up of solid material, it gets crushed when you sit on the seat and push back to support you.

Though the bicycle’s wheels are made by using the vital hub with the rim, which is thin and has several spokes, in the bicycle, they used spoke wheels, making it strong and lightweight.

How Does Bicycle Gear Work? 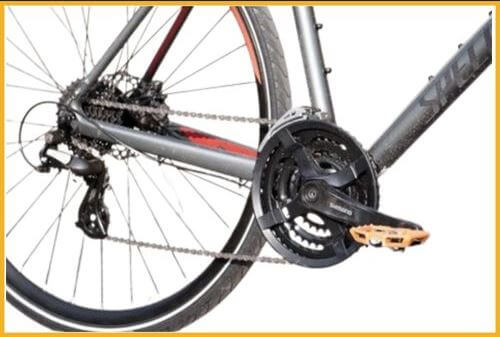 How Much Energy Are We Talking About?

With the hand-cranked machine, you can generate 10 watts of energy. However, you can not use it for a long time without getting tired. From this, the conclusion comes, or we can understand that by using your big legs, you can easily generate a large amount of power for a long period instead of using your arms and hands.

How Is the Braking System of Bicycle Work?

It doesn’t matter how fast you are riding your bicycle; you always need to stop your bicycle with the help of friction, and the brakes of the bicycle work. Nowadays, some of these bicycles use disc brakes, while many use the traditional caliper-operated rim brakes with the shoes.

Whenever you press or apply the lever of the brakes, two pairs of rubber shoes installed on the front and the rear wheel of the bicycle clamp onto the rim of the inner metal. As the shoes of the brake rub strongly against the wheel, it turns the kinetic energy of your bicycle into heat, which slows down your bicycle.

How Do Handlebars of Bicycle Work?

Handlebars are nothing but a type of lever. Because of the long handlebars, the bicycle offers leverage that makes it easy to axle the bicycle’s front wheel. The part outside the handlebars is for the steering, and the part is in the inner area for the gliding. This simple two-wheel machine uses momentum with the help of force and friction and then converts energy to get the rider to its destination.

As Mountain bicycles have wide tires, on the other hand, these racing and touring bicycles have narrow tires in their bicycles and also lightweight frames and handlebars, which are curved and have many different speeds. These bicycles are best for road riding.

That’s why it is also known as road bicycles. BMX bicycles are specially designed for racing on dirt tracks. These BMX bicycles have small frames, low seats, and high handlebars at one speed.

There are many different types of parts in the bicycle. But the parts like frame, seat, wheel, handlebars, and other components are the main parts of the bicycles.

Bicycles parts and their names:- Every single part of the bicycle has its name. Some of the parts of the bicycle are known to you, or some of them are unknown to you. The available parts include the seat, wheel, bicycle tires, wheel brakes, etc.

And the words unknown to you are like cassette, dropout, flip-flop. But some words will be new to every person except bicycle specialists, parts like step-thru, one-by, and the chainset.

Below There Are the Names of the Different Parts of the Bicycle.

All of these terms see different things, but they tend to be interchangeable. It has two arms that mount onto the bottom of the bracket at one end and a pedal on the other. The crank on the right hand has toothed rings which are part of the gearing system.

Two pedals are set on the left and right. As the bicycle rider pushes the legs to propel the bicycle to move forward, the bicycle’s pedal supports the feet.

This chain will join the sprockets of the rear wheel and the toothed ring of the crank, which is on the right hand. As the bicycle rider pedal the chain, the bicycle drives forward.

Generally, the metal tube fits inside the frame and supports the saddle. As it is fitted exactly into the tube of the frame, it can move up or down, allowing the saddle to be set at different heights for different riders.

It is a seat for the rider, or it is also called a chair. Rider seat on this while riding the bicycle.

This is the bicycle part where the rider places his hands to control the bicycle. This is where the mounted components to which the rider requires easy access with his hands, for example, gear lever and brake levers.

The brake lever is connected to the clippers with a hose or cable. The right-hand lever moves the front wheel gear, and the rear brake is moved with the help of the left-hand lever.

The pedals are connected by a chain to the back wheel. When the rider pushes on the pedals, the back wheel turns. This moves the bicycle forward. The rider steers by turning the handlebars or by leaning.

Bikes have one, two, or three front chainrings (gears). Cassette: Your bike’s rear cassette is the stack of cogs (gears) mounted on the right-hand side of your rear wheel. Chain: The chain connects the front chainrings and the rear cogs so that when you turn the pedals, you also turn the wheels.

A derailleur is a variable-ratio bicycle gearing system consisting of a chain, multiple sprockets of different sizes, and a mechanism to move the chain from one sprocket to another.

What Do You Mean by Cycling?

Cycling, also, when on a two-wheeled bicycle, called bicycling or biking, is the use of cycles for transport, recreation, exercise, or sport. People engaged in cycling are referred to as “cyclists,” “bicyclists,” or “bikers.”

History of the Bicycle

Bicycles were invented in 1817 by German inventor Karl von Drais. Since then, they’ve grown to become the most popular form of transportation (besides walking) worldwide. For many, bicycles are a symbol of freedom. Women suffragists hopped on bicycles to defy the patriarchy at the turn of the century.

How Does Bicycle Gear Work?

Gears are changed on the cassette (a set of sprockets on the rear wheel) by the rear derailleur. This shifts the chain up or down the cassette. As the derailleur moves to change gear, it forces the chain against ramps or steps, moving it onto a bigger or smaller sprocket.