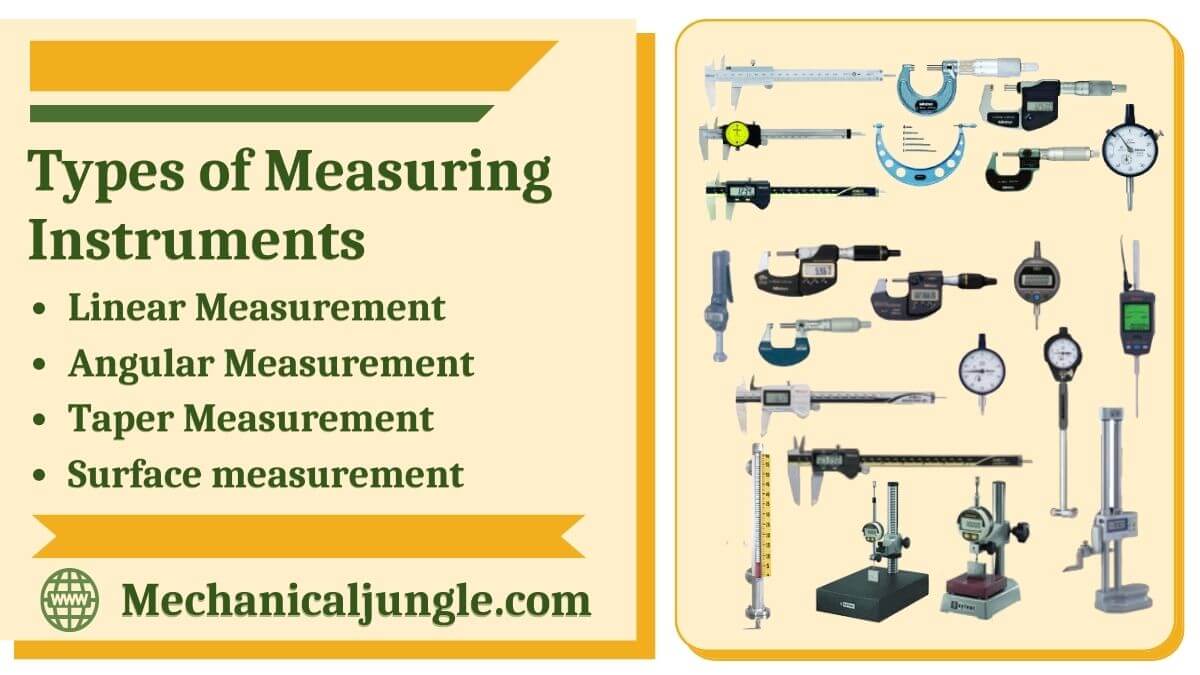 With the need to create quality products that meet design tolerances, a large number of firms use measuring instruments with high accuracy and precision. The specialized branch of science dealing with such instruments is known as metrology. 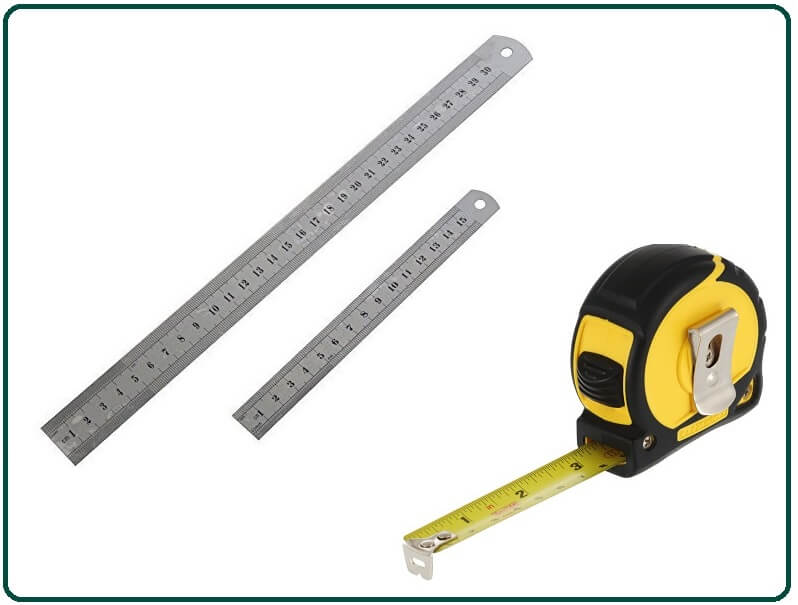 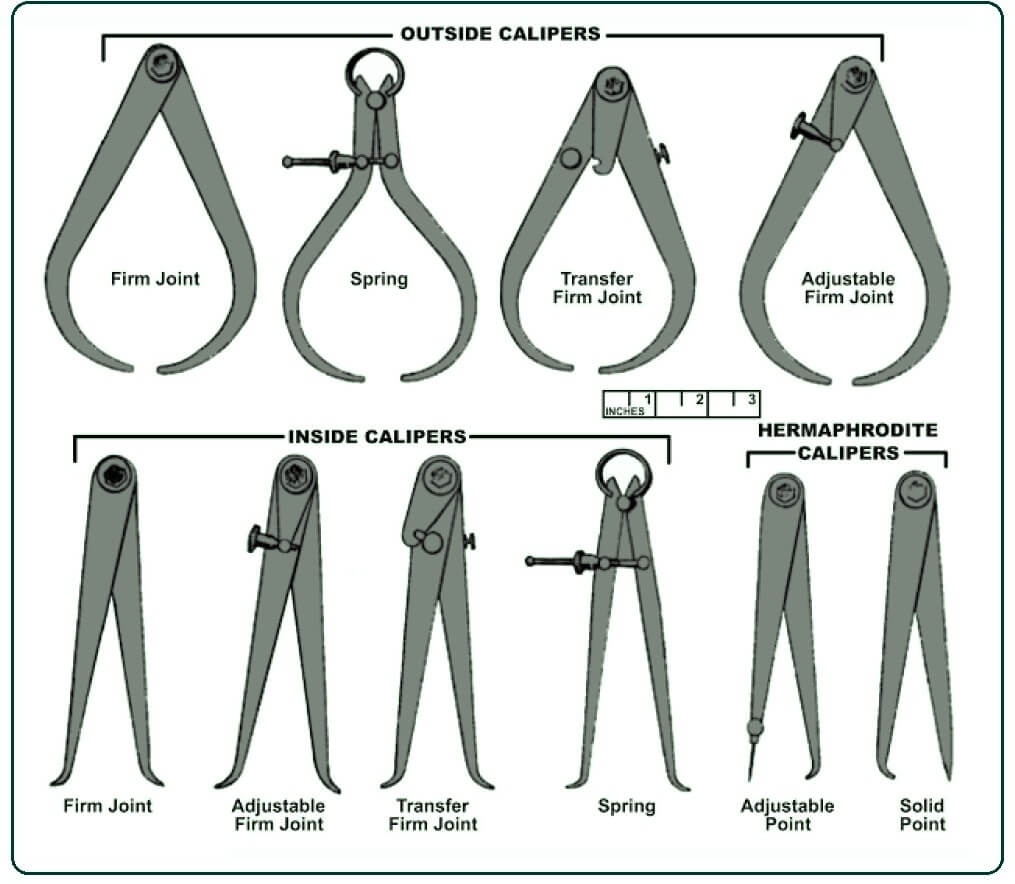 Different types of calipers are outside caliper, inside the caliper, spring caliper, transfer caliper, hermaphrodite caliper. 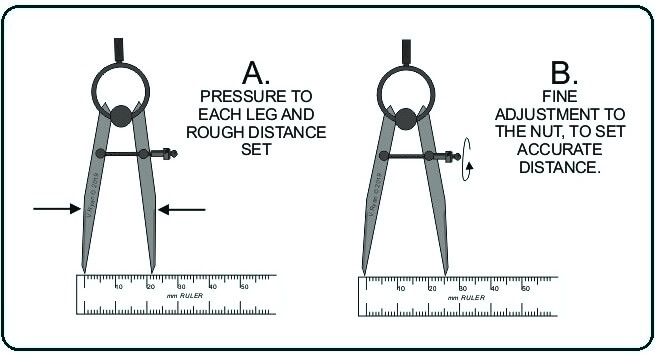 It is used to measure, move or mark distances with two straight adjustable legs held together. It is mainly used in the machine shop for the precise transfer of dimensions from a measuring scale and for inscribing lines on surfaces. 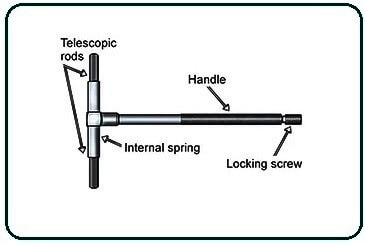 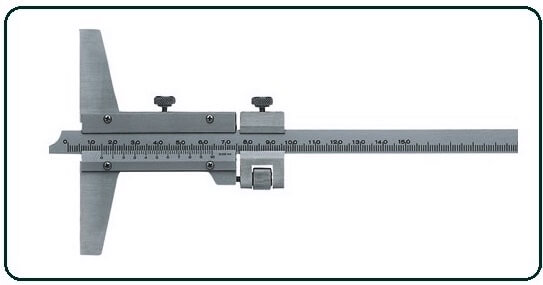 The depth gauges are used to measure the depth of a slot, holes, or any other surface of objects. It can be of a scales, dial, or digitals type.

Vernier caliper is primarily for measuring both inside and outside diameters. The measuring range of the caliper can be 0 to 25, 0 to 150, 0 to 200 mm, etc. If there is an error in the measuring instrument, then it is called zero error. And the correction done to eliminate the error is called zero correction. 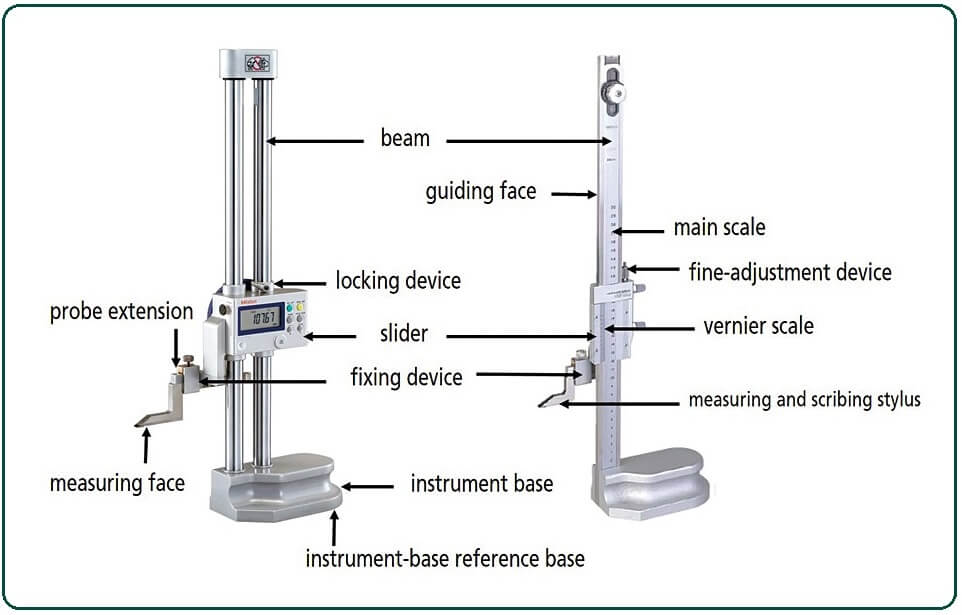 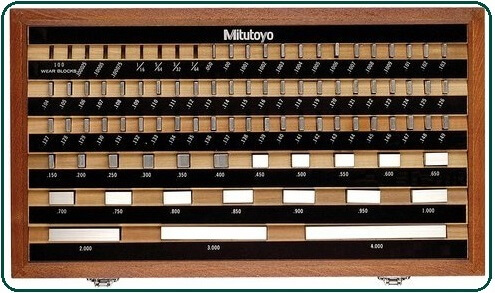 Slip gauges were firsts developed by Johnson & are sometimes referred to as ‘Johnson gauge blocks’. These are rectangular blocks of steel with a cross-section of approximately 32 mm x 9 mm. If two slip gauges are swung together under a certain pressure, they will stick to each other quite firmly due to molecular attraction and atmospheric pressure.

A comparator works on relative measurement, i.e. it gives only dimensional difference with respect to abasic dimensions. The comparator compares the unknown dimensions of a component with some standard or master setting that represents the original size and dimensional variations from the master.

The advantage of comparators is that their use does not require much skill on the part of the operator. Comparators are classified as mechanical, electrical, optical, & pneumatic. 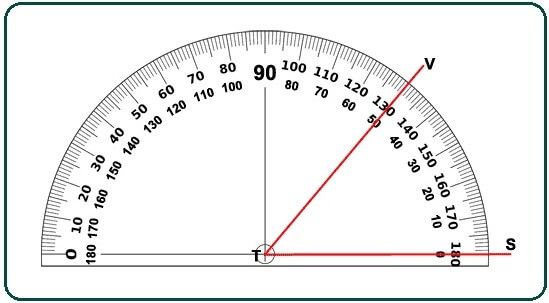 Protractors are measuring instruments, usually made of transparent plastic or glass, for measuring angles. Some protractors are simple half-discs, such as a bevel protractor with one or two swinging arms that can be used to help measure angles. 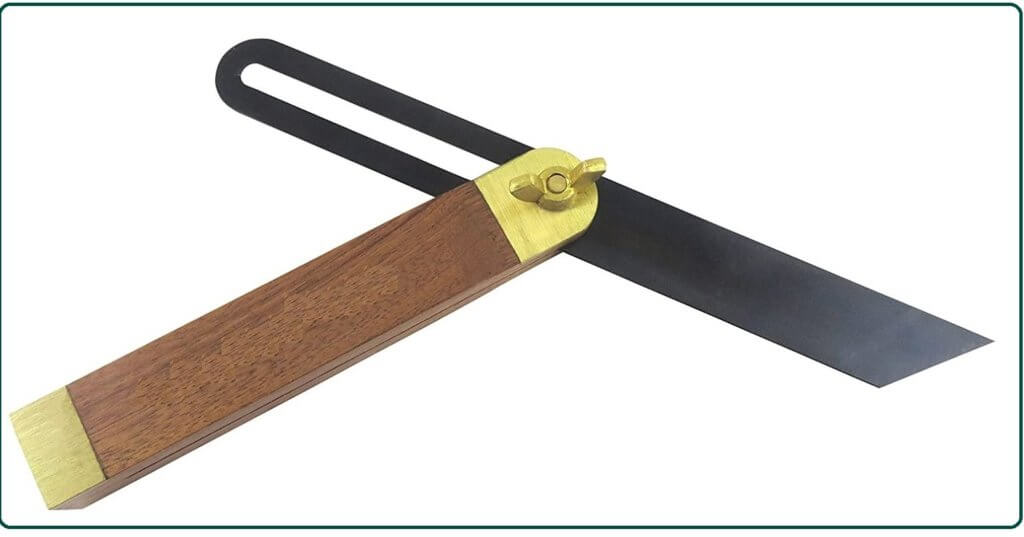 A sliding T bevel, also known as a bevel gauge or false square, is an adjustable gauge for setting and moving angles. The bevel can be used to mimic an existing angle or can be set to the desired angle using it with any other measuring tool such as a protractor. 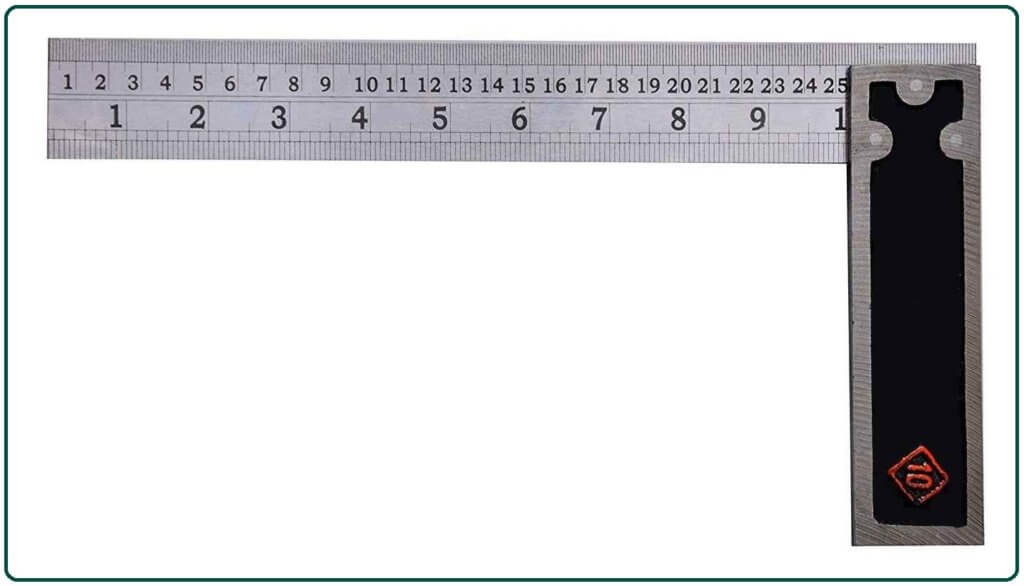 An engineer’s square is a tool used for working in metal to check whether a workpiece is square or not. It can also be used to helps draw or write a line at 90 degrees to the edge of a workpiece. 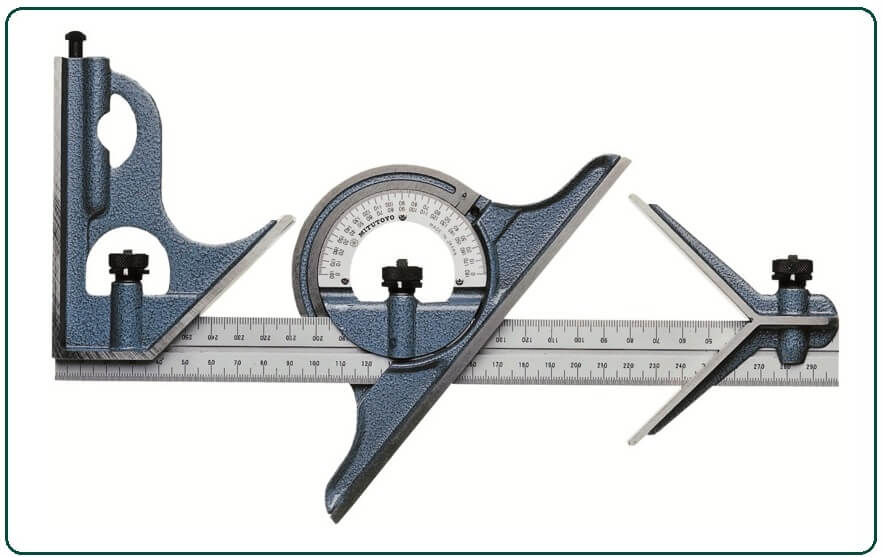 It is a tool used for many purposes in woodworking and metalworking. It consists of a blade and a moving head called a square head, a protractor, and a center head. The most common heads are standard or squares head used for laying or checking right angles and 45° angles. 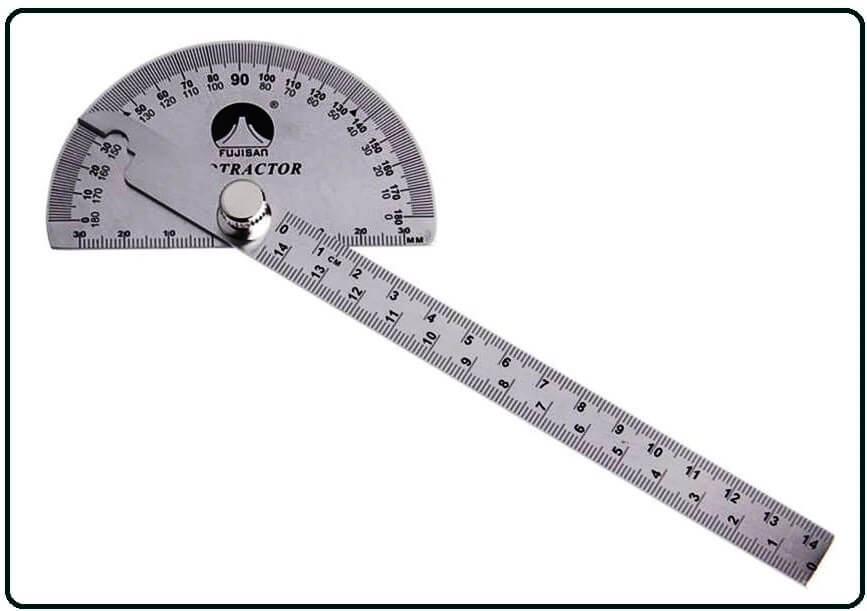 It is used for setting and testing angles very close. It reads up to 5 minutes or 1/20 degree and can be fully used through 360 degrees. 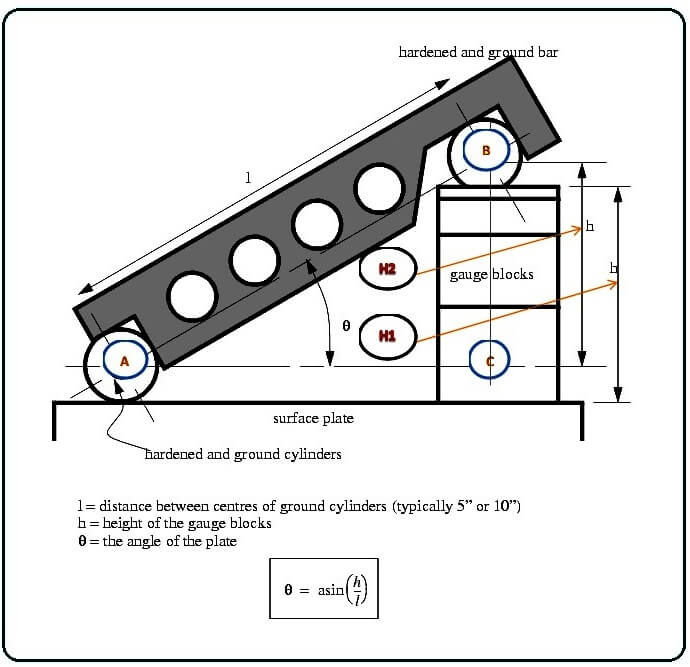 If a roller is raised by an unknown distance, the top edge of the bar will be tilted by the same amount of angle, perhaps calculated by the application of the sine bar. 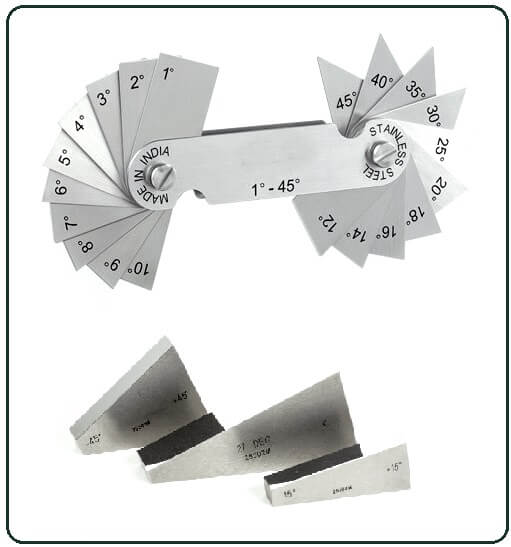 Spirit level, a bubble level, is designed to indicate whether the surface is horizontal or not. The spirit level had very few curved glass vials with a constant inner diameter at each viewing point.

These vials are incompletely filled with liquid ethanol- because alcohol has a low viscosity and surface tension that allows bubbles to travel down the tube quickly. A colorant such as a fluorescein, usually yellow or green, is added to increase visibility. 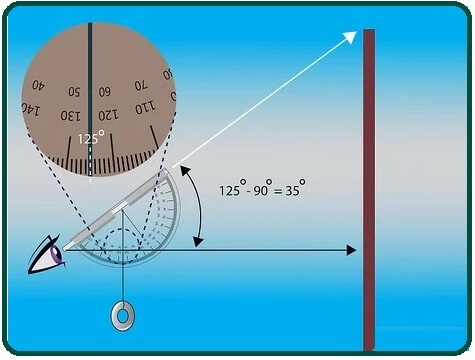 Clinometers are an instrument for measuring the slope, elevation, or angles of depression of an object with respect to gravity. It is also called tilt meter, slope alert, gradient meter, declinometer, pitch, and roll indicator.

The taper angle is measured by bevel protractor, toolroom microscope, autocollimator, sine bar, rollers, slip gauge, and micrometer. The taper micrometer itself has the sine bar principle and gives the true value of the taper of small angles.

Large tapers can be obtained directly from micrometer readings. This makes it possible to test both internal and external taper up to ten times faster than older traditional methods and does not require a sine bar or more elaborate equipment. 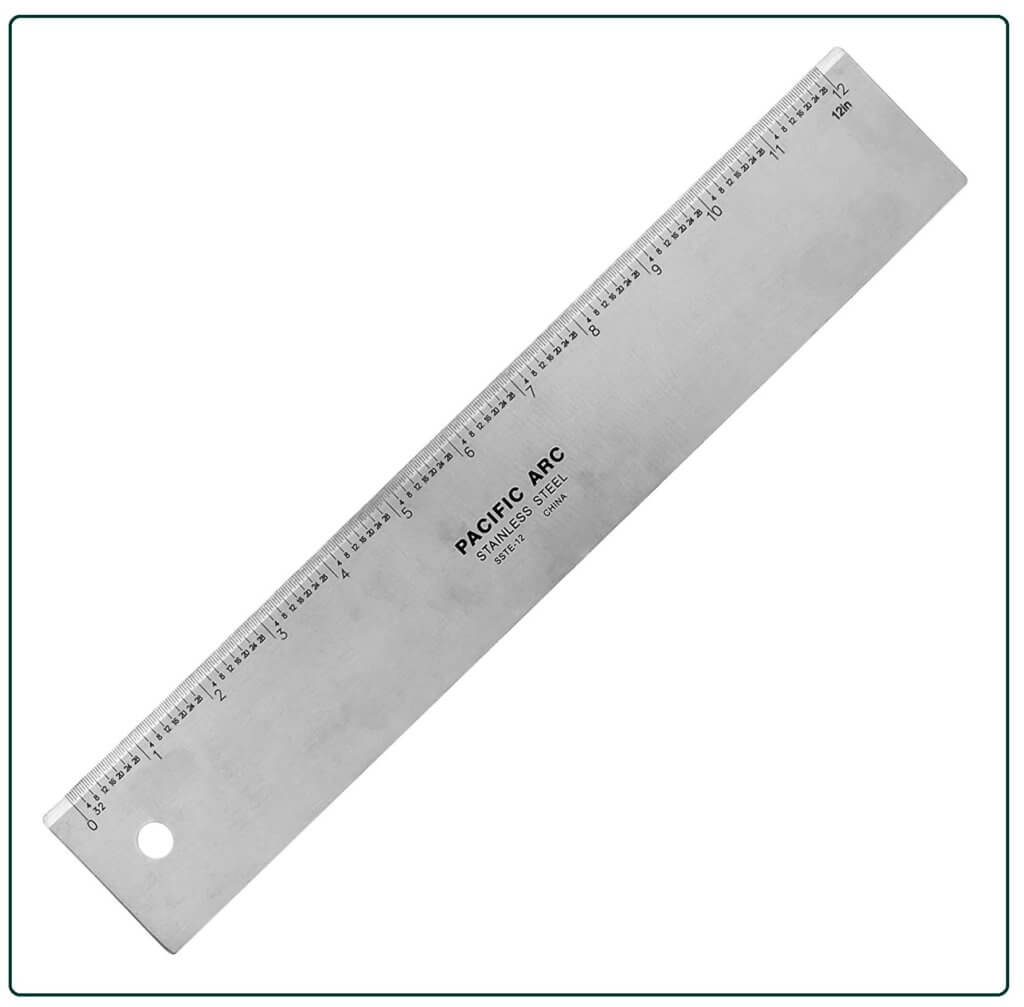 It is used to tests the straightness & flatness of flat surfaces. The simple shape is rectangular, but for precision work, one edge is beveled or made as to the edge of a thin knife. The narrow edge is the working surface, and the wide edge serves as the base when not in use.

Flatness is checked by an alight test. The narrow edge is applied to the surfaces to be tested & held horizontally at eye level, looking for light between the straight edge and the surface. 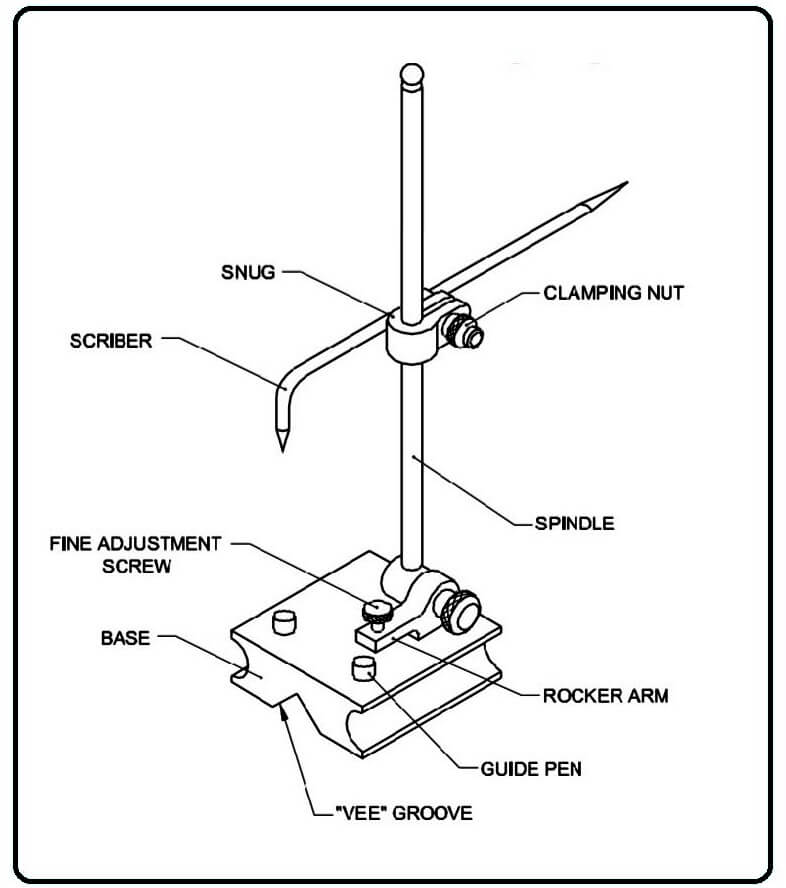 It is extensively used in laying the parts which are to be fitted or machined. It is used to test the equality of functions. If the scriber is replaced with a dial indicator, it becomes a precision instrument.

The tools have V-shaped grooves at the bottoms of the base to rest the block on a round bar to set dimensions from the bar to another part of the work. 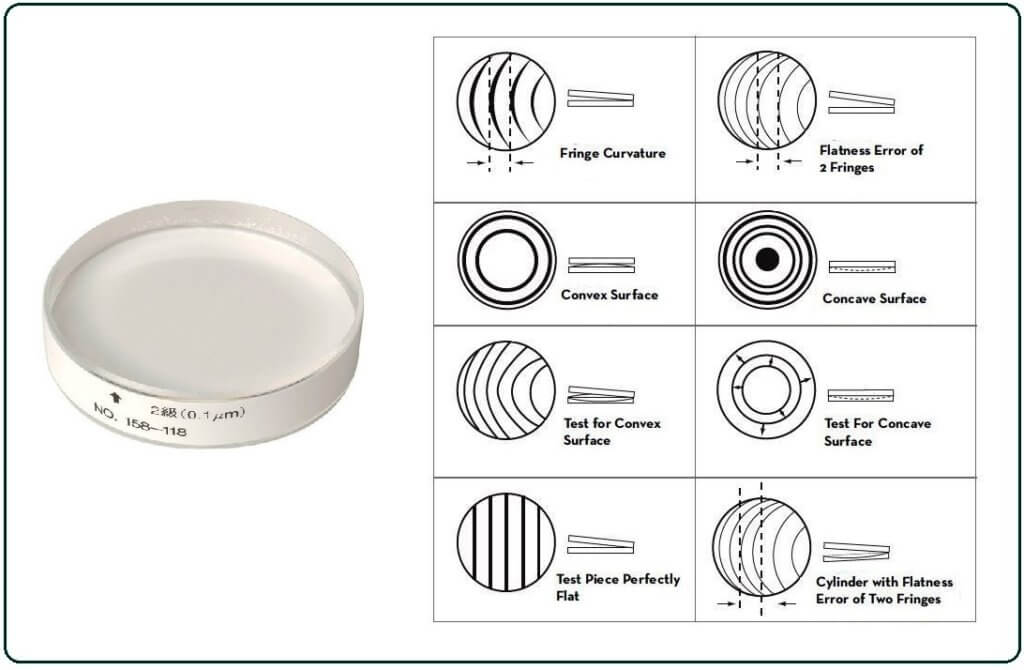 Optical flats are optical grade pieces of glass and are polished to be extremely flats on one or sides both, usually within a few tens of nanometers. They are used to determine the flatness of other surfaces with a single wavelength of monochromatic light.

When an optical flat is placed on another’s surface & illuminated, the light waves are reflected off the flat’s lower surface and onto the surface on which it is resting. The reflected waves interfere, creating patterns of interferences fringes visible as light & dark bands.

Flats surface is represented by a pattern of straight, parallel fringes with equal spacing, while other patterns indicate uneven surfaces. Typically, only one of the two surfaces of an optical flat is made flat to a specified tolerance, & this surface is indicated by an arrow on the edges of the glass.

A measuring instrument is a device to measure a physical quantity. In the physical sciences, quality assurance, and engineering, measurement is the activity of obtaining and comparing physical quantities of real-world objects and events.

Following are the types of measuring tools used for all purposes:

What Does a Profilometer Do?

Profilometry is a technique used to extract topographical data from a surface. This can be a single point, a line scan, or even a full three-dimensional scan. The purpose of profilometry is to get surface morphology, step heights, and surface roughness. This can be done using a physical probe or by using light.

Geiger counters are commonly used to measure the amount of radioactivity, but there are other types of detectors that may be used.

What Does a Refractometer Measure?

The refractometer is a well-established instrument used for measuring the water content of liquids. It measures the refractive index of the liquid, which changes according to the moisture content.