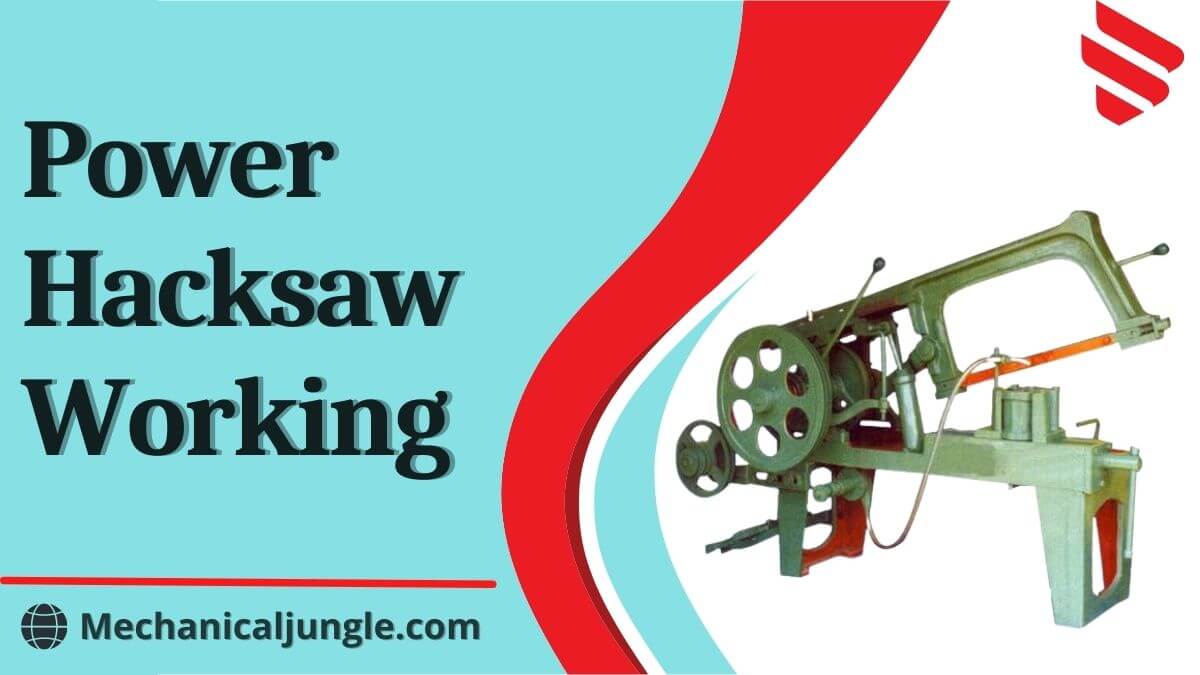 What Is a Hacksaw? 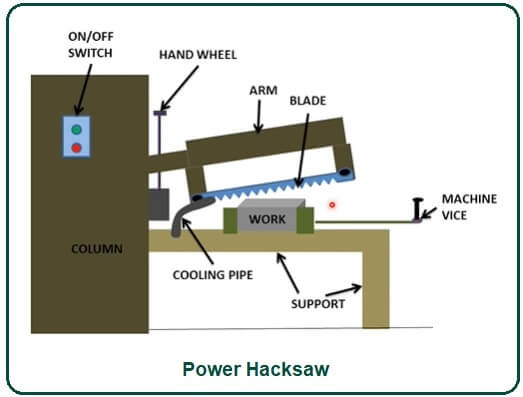 Hacksaw is hand-operated, used for cutting small toothed metal pipes, rods, brackets, etc. Huxos can also cut through the plastic. The hacksaw has a U-shaped frame & a handle at one end. Hacksaws have smalls pins at each end of the frame that receives a blade.

A tensioner nut or knobs is then used to extend the length of the frame, which puts tension on the blade & locks it in place. The blade can be installed for cutting on push or pull strokes; Cutting is more common on push strokes.

When a hacksaw is operated using machines, it is known as a power hacksaw. It is a type of rotating saw machine. Power hacksaw is used when materials cannot be cut to hack by hand.

When the cutting diameters of the material to be cut are large, it is very difficult to cut with a hand-cut hacksaw, in which case power hacksaws are used. Power hacks can cut large diameter or workpiece workpieces that require a large amount of time & hard work to cut.

This machine can be used to cut any type of material in workshops as the hacksaw blade used is made of HSS (high-speed). Some cutting fluids are provided in this machine to cut hard materials.

The first part of the powers hacksaw is the columns. This column is a housing for the drivings mechanism of the power hacksaws, & the electrical cables are also present inside this column.

In front of the column, there is two support, one is horizontals support, and another one is verticals support. The vertical supports the horizontals frame or support.

Machine Vice is present above the horizontals support. This machine’s vice is used to clamp the workpiece, i.e., hold the workpieces tightly. These vices are adjustable so that various sizes & shapes of metals can be held.

This machine’s vice has been handled. The vices can be tightened or loosened by turnings the handles. This vice locks the workpiece & does not allow it to move during the cutting operation. The size of the power hacksaws is determined by the largest workpiece that can be held in the vice.

The handwheels are present on the top of the handle & are rotated to move the hacksaw frame up and down.

The hacksaw blade performs the cuttings operation on the workpiece. The blade does cuttings in the forward stroke & removes chip produced while cutting in the backward strokes. The blade of this hacksaws blade is made up of high-speed steel. Blades of power hacksaws are categorized based on the materials from which they are made and the number of teeth in the blades per inch.

The top category blade is made from High-Speed Steel (HH.S.S. But HH.S.S.blades are very expensive, so there are cheaper alternatives like carbon steels blade.

A handle is attached to the column. These handles are used to move the hacksaw frame & hence the hacksaw blade up and downs. Hacksaw blades are moved near the workpiece to performs the cutting operations. 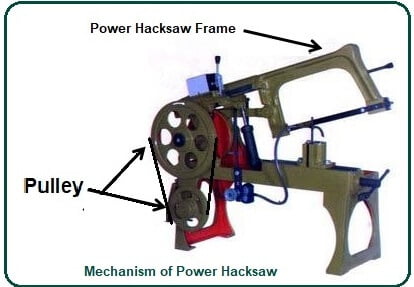 Two pulleys are placed on fronts of each other. One winch is on top of another. These two pulleys are connected by a belt. A link is attached to the pulley at the top. The link is connected to a pulley on one side and an electric hacksaw frame on the other side.

So in this way, the driving mechanism of an electric hacksaw works. We can increase or decrease the speed of the pulley, and the feed of the forward and backward strokes can be adjusted into a power hacksaw.

We can easily attach any workpiece in the vice of this machine to use movable. The cooling pipe then supplies the coolant during the cutting process between the hacksaw and the workpiece.

This coolant extends tool life, helps remove chips and removes heat generated during cutting, and keeps equipment and workpiece cool. This coolant acts as a lubricant to smooth the cutting process.

The hacksaw moves along the blade frame using the driving mechanism of the power hacksaw present inside the front and rear columns.

When the hacksaw blade is brought near the workpiece, and the switch is switched on. The driving mechanism begins, and the cutting process or the process of removing material from the workpiece.

A forward stroke of a power hacksaw is a cutting stroke that consists of a material removal process, and a backward stroke is a passive stroke. Cutting only during the forward stroke avoids unnecessary wear on the saw blade.

A backward stroke is used to extract chips from the workpiece produced during the forward stroke.

Power hacksaws are often used to cut large pipes, steel, cast iron and other hard materials. The straight blade is attached to the tool and moves back and forth across the workpiece to make the cut. Power hacksaws have a slower speed and longer stroke length than reciprocating saws, which slows the cutting speed but leaves a finer edge.

Following are the main two parts of a hacksaw:

What Is a Hacksaw?

A hacksaw is a handheld, small-toothed saw used to cut metal pipes, rods, brackets, etc. Hacksaws can also cut through the plastic. The hacksaw has a U-shaped frame and a handle at one end. There are small pins on each end of the hacksaw’s frame that receive a blade.

Small Hacksaws easily fit in your toolbox or in limited spaces and are great for making fast cuts in small pieces of metal, wood and plastic – such as a metal rod, a block of wood or PVC tubing.

Power hacksaws offer a range of options for portable cutting of pipe, structural steel, tanks and other materials. The rechargeable electric saw is light and portable, long battery life, and will not damage the bark. This is a professional electric hacksaw tool. Electric hacksaw adopts high-quality tungsten steel material, durable and wear-resistant.