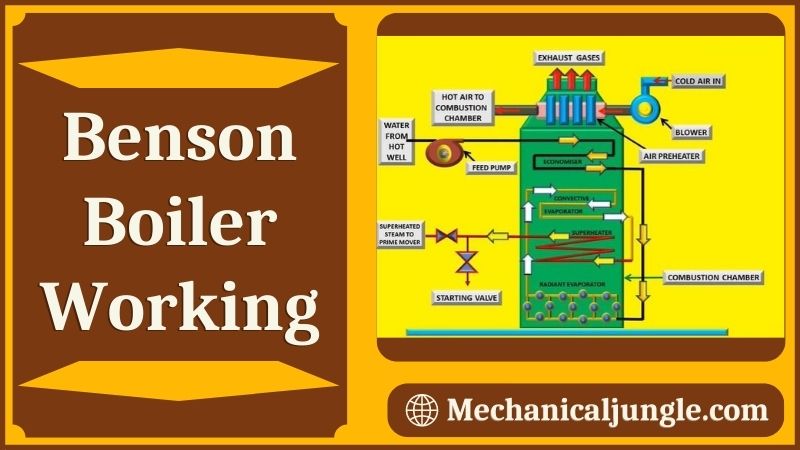 What is Benson Boiler? 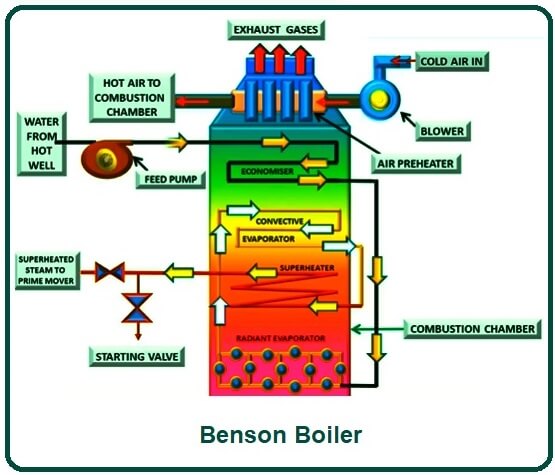 It is a high-pressure water tube boiler with the forced circulation that operates on the basic principle of critical pressure of water. The stress boiler was invented in 1922 by Mark Benson. This boiler is a supercritical boiler. In this boiler, no bubbles are formed on the surface of the water as the water is compressed under supercritical pressure.

As the latent heat of waters reduces to zero, the water directly transforms into steam without the formation of bubbles.

Benson boiler is a forced pump water tube boiler. Water enters the boiler at significant pressure. Water feed pumps are used to supply water inside the boiler at a supercritical pressure of 225 bar.

When the waters feed pump feeds the water, before entering the tube, this water first passes through the economizer, which uses combustion gases to heat the water, which also increases the efficiency of the water.

It preheats air before entering the furnace. Preheat air increases the burning efficiency of the fuel.

It heats water from radiation generated from burnt fuel. This raises the temperature of the water to the supercritical temperature.

In convection evaporators, convection is used to transfer heat from flue gases to water. In this evaporator, water evaporates completely.

This is the last chamber in the bollox boiler through which the hot steam passes. This superheats the steam to the desired temperature, and this superheated steam is taken out for industrial purposes.

The first and biggest part of Benson Boiler is Benson Chamber. Inside this chamber, other parts are kept. The blower is connected to the air preheater. Below the air preheater, a feed pump is present.

This radiant superheater is connected to a super convective heater, which is finally connected to the turbine.

In stress boilers, we are not using steam and water drop. This will directly convert water into steam. The blower will start working, and it will blow air into the preheater, and the air preheater will heat the air, and hot air will come out. This hot air will be used in the furnace for further processing.

The feed pump raises the water pressure to the supercritical pressure, and then the water enters the economizer. In the Economist, water is preheated using combustion gases to increase the efficiency of the boiler.

From the Economist, the water goes to the Radiant Super Heater. In super radiant heaters, water is heated using the radiant heat transfer method. Here heat is transferred from the water to the chamber, and the water will be partially converted into steam, and partly, it will remain in liquid form. Then this partial vapor and liquid convection will go to the superheater.

In super convection heaters, it will completely convert to vapor or steam, and this superheated steam will get to the prime mover and rotate the turbine. It is working as a Benson boiler.

The disadvantages of Benson boilers are as follows.

The applications of Benson boilers are as follows.

The advantages of the Benson boiler are as follows.

What Is Benson Boiler?

Benson boilers are drumless, high-pressure, water tube boilers that use forced circulation. This type of boiler has the unique feature of not having a steam separation drum.

A Benson boiler is a type of Once-Through Boiler patented by Marc Benson in Germany in 1923 and incorporates recirculation characteristics at part-load operation below about 60° MCR. The Benson boiler usually consists of small diameter tubes (ca. 25 mm bore) spirally wound to form the furnace envelope.