How Do Nuclear Power Plants Work?

Nuclear power plants generate electricity in a manner very similar to other conventional power plants, the use of which varies by type of fuel. All power generation plants produce heat that turns water into steam, which drives a turbine connected to a generator and subsequently produces electricity.

Uranium, a naturally radioactive element found mostly in rocks, is used in nuclear reactors as a fuel. In a nuclear reactor, uranium atoms are separated into smaller parts by changing their molecular structure using a fission process. The energy released during this division produces heat to produce steam, which is used by turbine generators to produce electricity.

The nuclear power plant is one of the most environmentally friendly methods of electricity generation because the nuclear plant does not burn fossil fuel, so they do not produce greenhouse gas emissions. The nuclear fissions process is a highly efficient way to generate power – a uranium pellet, the size of fingertips, produces the same energy as 480 liters of oil or 1 ton of coal. 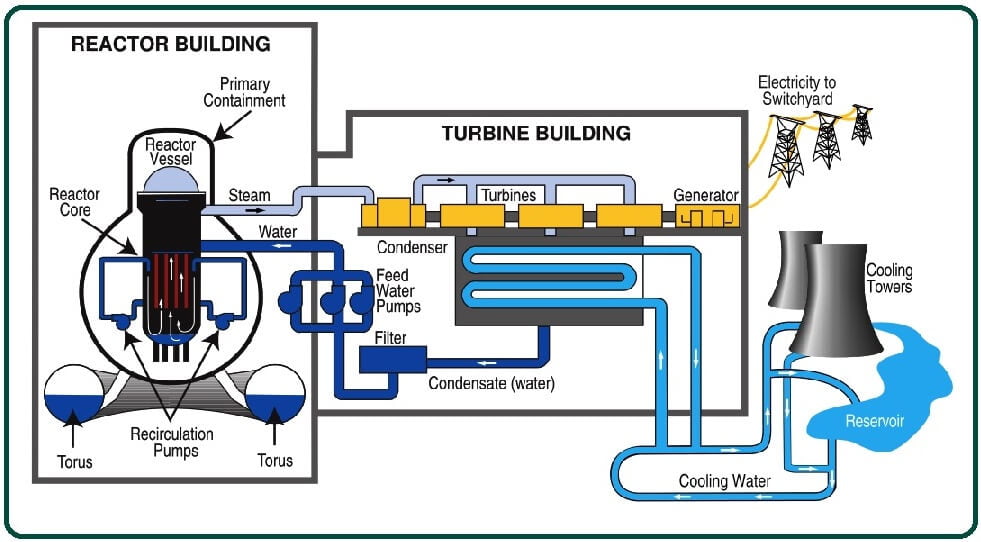 It was previously indicated that nuclear reactors are a site that can initiate, maintain, and stop nuclear fission chain reactions in a controlled manner. The main components are:

In power plants, a nuclear reactor is an essential component like a heat source that includes fuel and its reaction in the nuclear chain, including nuclear and waste products. The nuclear fuel used in a nuclear reactor is uranium, and its reactions are produced in the reactor. Then, this heat can be transferred to the coolant of the reactor to generate heat for all parts of the power plant.

There are various types of nuclear reactors that are used for the manufacture of plutonium, ships, satellites, and aircraft, as well as for medical purposes. The power plant not only includes reactors and includes turbines, generators, cooling towers, and a variety of safety systems.

The material also typically enriches uranium dioxide, where fission reactions occur. It is used simultaneously as a source of energy & neutrons to maintain the chain reactions. It is presented in a solid state in the form of cylindrical tablets covered in metal rods a few meters long.

Water slows down fasts neutrons produced by fission, leading to new impregnation and continuity of the chain reaction.

In a nuclear power plant, the essential part is a cooling tower which is used to reduce the heat of the water. Please see this link to find out what a cooling tower is – to learn more about components, construction, and applications.

Control element in the reactors. They act as neutron absorbers. This rod is made of indium-cadmium or boron carbide & makes it possible to continuously control the neutron population while keeping the reactor stable; They make it possible to stop the reaction whenever necessary.

This prevents the leakage of radiation and neutrons from the inside of the reactor to the outside. The shielding is usually made of concrete, steel, or lead.

All nuclear power plants have a number of safety systems to prevent leakage of radioactivity from the outside. These systems include construction buildings.

The steam turbine is made to rotate with high-pressure steam, and the shaft of this turbine is further connected to the generator.

This converts the rotational speed of the turbine-generator coupling into electrical energy. This electrical energy is then transported to a higher voltage through the transformer and then transmitted through transmission lines to the nearest power grid.

The condenser converts the steam coming from the turbine to water so that it can be pumped back to the cooling tower to circulate the heat exchanger again. There may also be simultaneous cooling water from the river and cooling tower for the circuit if we have a river flowing near the plant. In a power plant, fission occurs in the reactor, and the center of the reactor is known as a core that contains uranium fuel and can be formed into ceramic pellets. Each pellet produces 150 gallons of oil energy. The total energy generated from the pellets is stacked in the metal fuel rods. A bunch of these rods is known as fuel assemblies, and a reactor core comprises several fuel combinations.

During nuclear fission, heat can be generated at the core of the reactor. This heat can be used to heat water into steam to activate the turbine blades. Once the turbine blades are energized, then they run a generator to make electricity. Power plants have a cooling tower available to cool the steam; otherwise, they use water from various resources. Finally, chilled water can be reused to generate steam.

Now to split the uranium atom, we have to increase it; what we do is attack a neutron in this large uranium atom, which converts it from uranium-235 to uranium-235. Uranium-236 is a super-volatile atom and splits into krypton-92 and barium-141, which are more stable.

Apart from the release of energy, three free neutrons are also released in the process. These neutrons strike another three uranium atoms and initiate a chain reaction, yielding large amounts of thermal energy. 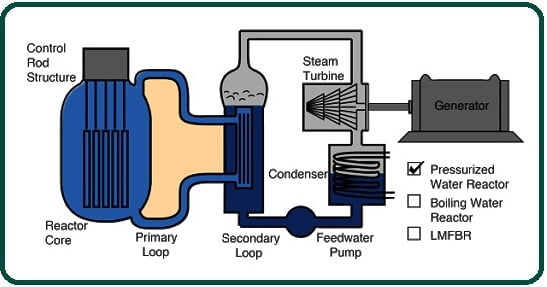 In such a reactor, regular water is used as a coolant. It is kept at a very high force so that it does not boil. In this reactor, a heat exchanger transfers hot water where the secondary coolant turns water into water vapor from the circle. Therefore, this loop is completely free of radioactive material. In this reactor, coolant water acts as an intermediary. Because of these benefits, these reactors are the most frequently used.

In such a reactor, only one coolant loop is available. Water is allowed to heat up within the reactor. The steam is produced from the reactor when it exits the reactor, and steam will flow throughout the turbine. The main drawback of this reactor is that coolant water reaches the fuel rods and turbines. So, radioactive material can be located above the turbine.

The site for Atomic PowerPoint can be selected considering the technical requirement. The arrangement and function of the nuclear power plant mainly depend on the characteristics of the site. When designing the plant, risks from the site must be considered. The design of the plant has to handle tremendous natural phenomena and human-induced functions without damaging the operational safety of the plant.

Elements such as uranium or thorium undergo a nuclear fission reaction in a nuclear reactor. Due to this fragmentation, a large amount of heat energy can be generated and is transmitted to the refrigerant reactor. Here, coolant is nothing but water, liquid metal otherwise gas.

The water is heated to flow into the heat exchanger so that it turns into high-temperature steam. Then the steam that is produced is allowed to make steam turbine runs. The steam can again be converted back into the coolant and recycled for use with the heat exchanger. So, the turbine and alternator are connected to the production of electricity.

The power that is produced, using transformers, can be extended to use in long-distance communication. It all starts with a thermal neutron that shoots uranium and starts a chain reaction, with the release of 3 new high-energy neutrons as a byproduct of this exothermic reaction. These neutrons attack another three uranium atoms, and this chain reaction continues to grow.

The main functions of this water are to slow down high-energy neutrons to the level of thermal neutrons or to modify the speed of neutrons, which is why it is called a moderator. When neutrons travel in heavy water (deuterium oxide), it collides with each molecule of heavy water and thus transfer their energy to a moderator and slow down to an optimal speed.

In a nuclear power plant, the chain reaction initiated is mainly controlled by boron or cadmium rods. These rods absorb excess neutrons and thus inhibit the chain reaction. Typically, these rods are placed in and out of pressure vessels every 10 seconds, so that power output can be controlled according to the requirement or load on the turbine.

The hot water or moderator in the pressurized vessel is then pumped into the heat exchanger. Moderators cannot leave the circuit in mind because it is radioactive, so water is pumped from a water source (river) for heat exchange, and this water absorbs the moderator’s heat and converts it to excessive pressurized steam.

This power is then transported to high voltages by step-up transformers and transmitted through transmission lines to the nearest power grid. The steam leaving the turbine is then condensed into a condenser. The condensers are connected to the cooling tower.

Here, the different advantages of nuclear power plants are as follows

Here, the different disadvantages of nuclear power plant are as follows

How Do Nuclear Power Plants Work?