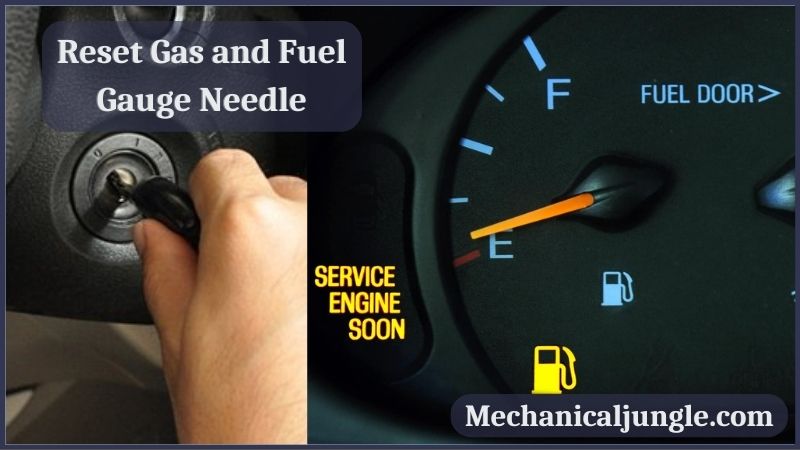 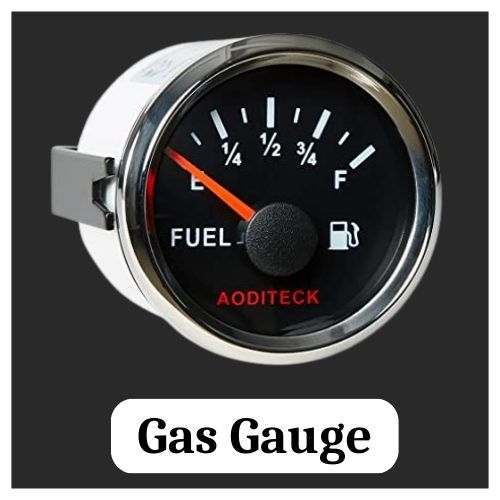 You’ll know how aggravating it may be if you’ve ever driven until you ran out of gas and then had to reset the needle on your gas gauge. When you put extra gas in the tank, the gas gauge should start working immediately; nevertheless, there are occasions when it does not move and needs to reset.

Find the wire connecting your gas gauge to its transmitting unit, and remove it from the connector. For grounding, attach this wire to a component of your car that is made of metal. You should see the pointer on your gas gauge return to the “Empty” position, at which point you can reconnect the batteries.

In this post, we will guide you through resetting the needle on your gas gauge step by step so that you can get back on the road. This is a procedure that can be completed in a matter of minutes, and it has the potential to save you from having a gas emergency in the future.

How to Reset Gas Gauge Needle

If the fuel gauge in your vehicle gives you an erroneous measurement or display of the fuel currently in the gas tank, the problem is most likely caused by a problem with the software or the electronic components that make up the fuel gauge.

Resetting the fuel gauge is the primary remedy to the problem of an incorrect fuel gauge. The technique that must be followed to reset the fuel gauge on a car is often outlined in the handbook or manual that comes with the automobile. Nonetheless, the steps are the same for the majority of vehicle types.

When to Reset the Gas Gauge Needle

When the needle on the gas gauge starts moving in an unpredictable pattern, you should reset the gauge. One of the earliest and most blatant indications that there is a problem is when this occurs (likely with the fuel gauge sender). For instance, the needle might suggest that you have a half-full tank at one point, and then just a few minutes later, it might abruptly plummet to a quarter-full reading.

Reset the gauge whenever the needle becomes fixed on the “Empty” position, regardless of the current level of gasoline. This is a common indication that the fuel gauge needs to reset. This is intentional because it is safer to believe that your tank is empty and add more gas as a precaution rather than the other way around. Turning the car off and then back on may provide a temporary solution to this problem.

You will need to reset the needle if it does not budge from the “Full” position. This is a less common indication of a problem with the gauge or the sender. If this happens, you need to ensure that you fill up your tank as regularly as possible because, once the gauge is fixed, you will be able to see how much fuel you have.

The float inside the gasoline tank will rise or fall in response to the height of the fuel in the tank. Because of the movement of the metal rod concerning the float, the wiper included within the variable resistor is also allowed to move.

Each manufacturer designs its fuel-sending units to operate uniquely. whereas the fuel-sending unit on a GM vehicle of the same year will be the one closest to the ground when the tank is full. Consult the service handbook to understand how your vehicle’s gasoline-sending unit reads the resistance.

On the resistive material strip, the windshield wiper will either be the closest to the ground or the farthest from the ground when the fuel tank is filled. This is either the point where there is the least amount of resistance or the maximum amount of resistance. When a vehicle is running on its last few drops of fuel, the wiper again is either closest to or furthest from the ground because the float rests at the bottom of the metal rods travel. The fuel gauge will display either full or empty, depending on the resistance. It reads as full or empty, which will vary depending on the specs of the gauge.

When the fuel level and the float drop in the tank, the metal rod connected to the float moves the wiper further away from the ground or closer to it, this either decreases or increases the electric current sent to the fuel gauge. The change in resistance causes the fuel gauge display to move away from the full position.

What Causes a Fuel Gauge Not to Work? 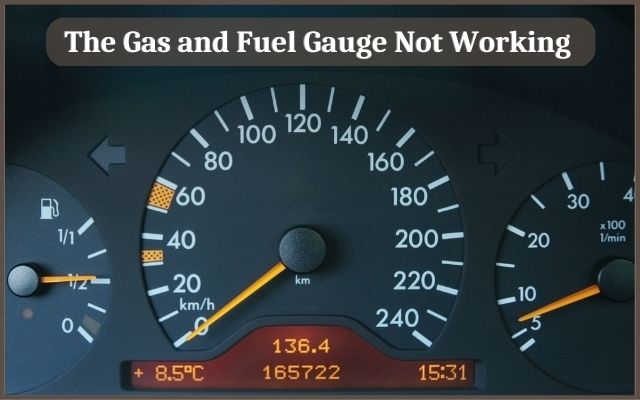 The fuel gauge indicates no fuel when the tank is full. The float may have come loose from the arm in the fuel-sending unit, which has caused the rest of the components in the unit to come to a complete stop. This would cause the fuel gauge only to read “empty.” A defective resistor can sometimes cause the gauge to read empty by limiting the signal to the point where it is no longer detectable. Wires that have corroded, particularly those that are part of a fuel-sending unit mounted on the gasoline pump, have the potential to interrupt the flow of voltage from the source or to the fuel gauge.

It’s possible that the mechanical problem is to blame for a fuel gauge display that vacillates between showing empty and full. The float arm of the gasoline-sending unit can become “stuck” at certain levels and then either fall back into place on its own or with the assistance of vehicle movement. The accuracy of the fuel gauge will be restored after the float arm is returned to its proper position. This occurrence can frequently be reproduced, providing additional evidence of a mechanical failure. In some instances, this problem could also be caused by a malfunctioning fuel gauge.

Many different things could go wrong with the needle on the gas gauge, including the following:

A problem with the float: The float is susceptible to becoming broken or stuck, which prevents it from rising and falling in response to changes in the fuel level. An issue with the wire: If it becomes frayed or broken, it will no longer be able to send a signal to the gauge.

An issue with the gauge: The gauge has the potential to become damaged or malfunction, which would prohibit it from reading the signal from the wire in an accurate manner.

They will look over the float, looking for any signs of damage or debris that might be stopping it from flowing smoothly and inspecting any areas they find.

How to Inspect Float

You can take the float out of the tank and look for damage to it if you have reason to believe that it may be the source of the issue. To accomplish this, you will need to:

How to Replace the Gauge

There might be an issue with the float, the cable, or the gauge itself; alternatively, the problem might be a loose connection. A competent mechanic can fix your gas gauge, who will first identify the issue and then put it back in working order.

How Often Should I Check My Gas Gauge?

It is in your best interest to perform routine maintenance on your gas gauge to ensure that it is accurate and reliable. If you notice any bad gas gauge needle symptoms, such as a needle that doesn’t move, an erratic needle, or a needle that’s stuck, you should also check it out.

A malfunctioning gas gauge is an annoyance and a potential safety hazard because driving without sufficient fuel can cause expensive damage to a vehicle. If yours is malfunctioning, the gas gauge needle can be reset by following these steps. You can quickly get your gas gauge back to working properly with a little investigation and troubleshooting.

How Are the Gas Gauge Needle Problems Repaired?

When there are issues with the needle on the gas gauge, the necessary repairs will vary depending on the root cause of the issue. Possible fixes include the following:

The symptoms of a faulty gas gauge needle can range from a needle that doesn’t move at all to a needle that moves erratically or gets stuck. There might be an issue with the float, the wire, or the gauge itself; alternatively, the problem might be a loose connection. A qualified mechanic can fix your gas gauge, who will diagnose the issue, and then put it back in working order.

Connecting this wire to a metal component of your vehicle will serve as a ground. You should see the needle on your gas gauge move back to the “empty” position. Last but not least, reattach the negative terminal of the battery. Your gas gauge needs to be reset, and you should ensure

It Is Functioning Correctly

Repairs could be as straightforward as swapping out a wire or float or as involved as replacing the entirety of the gas gauge, depending on the nature of the issue that necessitated them. In either case, resolving the issue as soon as possible is essential to maintain an accurate reading of the fuel level in your vehicle.

Maintaining your vehicle on a routine basis and addressing any issues that may arise will keep it operating efficiently and help you avoid unneeded breakdowns.

How to Reset Gas Gauge Needle

Press and hold the “Trip/Odo” button and turn the car back on. While you’re holding the button, turn the key back to the “ON” position. Hold the button down for another 2 seconds after the car’s back on, then release.

When to Reset the Gas Gauge Needle

Reset when the needle is stuck on “Empty,” regardless of the fuel level. This is a very typical sign that the fuel gauge needs a reboot. This is by design—it’s better to think your tank is empty and preventatively add more gas than vice versa. Sometimes, turning the car off and back on will temporarily fix this.

Why does my fuel level gauge bounce around when I am driving? If your fuel level gauge stays still when the car is still, the problem is due to sloshing fuel in the tank. When the vehicle is in motion, fuel is allowed to move back and forth and move, or “slosh” around.