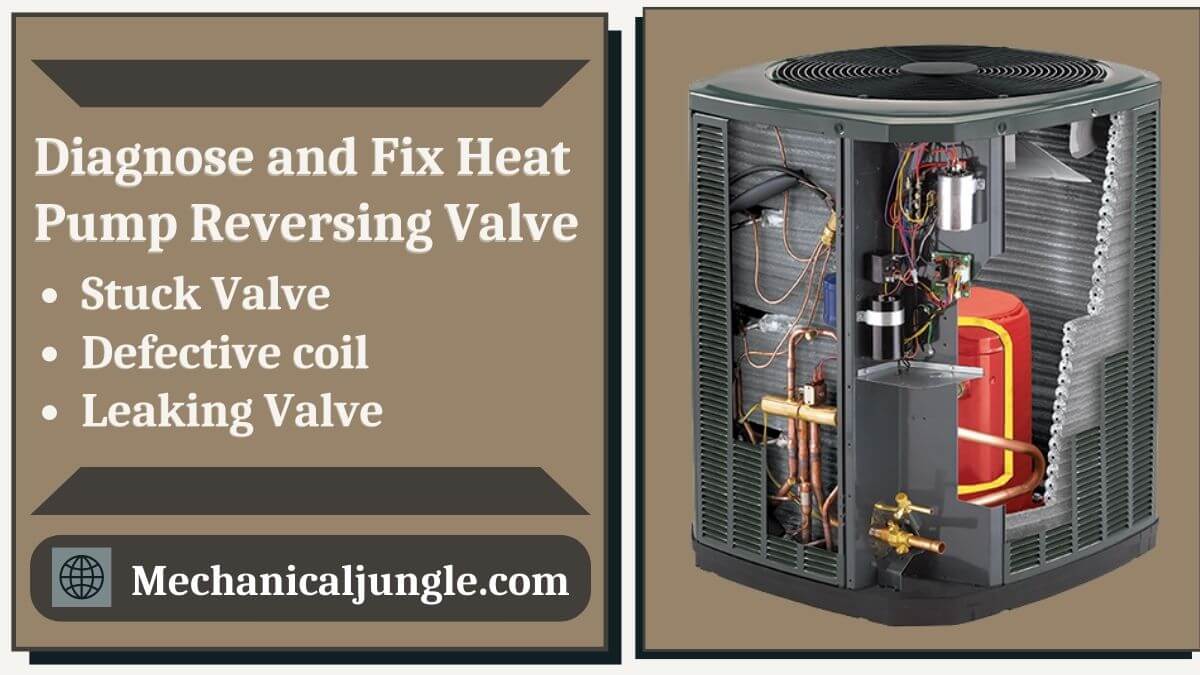 In typical air conditioners, the refrigerant absorbs the heat inside the house in the evaporator coils. The temperature and pressure in the compressor rise, and it moves towards the condenser coil to reject the heat outside. A heat pump reversing valve reverses the process by cycling the refrigerant in the opposite way.

This makes the condenser act as the evaporator & vice versa. You can see the heating cycles in the images below. Even though it can be cold outside in winter, the refrigerant can still absorb the heat outside.

The outer coil acts as the evaporator coil and absorbs that heat. As usual, the refrigerant travels to the compressor before condensing within the indoor coil. When refrigerant condenses on the indoor coils, the heat is expelled into the house. The delicious air coming out of the grills is actually heat taken from outside, no matter how rare it is.

In a heat pump, a reversing valve controls the direction of flow of the refrigerant. A refrigerant is a chemical mixture that allows heat exchange to occur. If the refrigerant flows in a different direction, it causes a switch in the function of the indoor and outdoor coils, and it changes whether heat leaves or enters your home.

Whether the active state produces heating or cooling, the manufacturer sets something up, and the consumer should not worry. In fact, consumers shouldn’t concern themselves with a reversing valve at all: If it fails, only an expert technician can replace it.

If your heat pump has lost half of its working capacity, the problem may involve the reversing valve or some other malfunctioning component – and you’ll need to figure out which one and make up for the Ierna’s heating and cooling. HVAC specialist required—proper repair and adjustment.

If your home doesn’t have a gas furnace or chimney, your unit’s reversing valve is probably your bests friend during the winters months. As their name suggests, reversing valves reverses the flow of the refrigerant so that hot, compressed vapor is sent to the indoor coil instead of the outer coil.

Differences Between an Air-Source Heat Pump and an A/C Unit:

As you can see above images, a check valve on each metering device determines which extension device to use and which to bypass. Then there’s the obvious answer: Air-source heat pump has to reverse valves while basics A/C units do not.

The “Reversing” Part of the Reversing Valve: 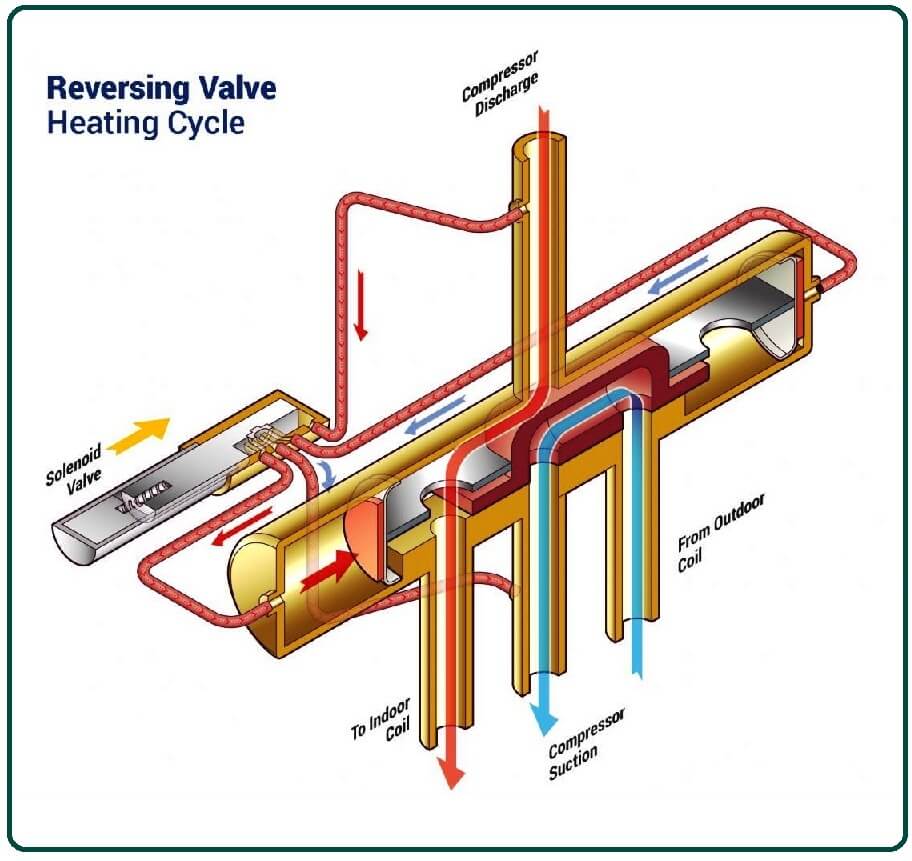 Reversing valves primarily use a sliding mechanism to divert the refrigerant flow, but a few different parts make this process possible. The actual parts that slide to redirect the refrigerants are simply called the slide.

That red part inside the slide looks like an upside-down canoe. Therefore, we informally call it “canoe”. This part fits into the bottom two lines and redirects the suction, as you can see from the big blue arrow. 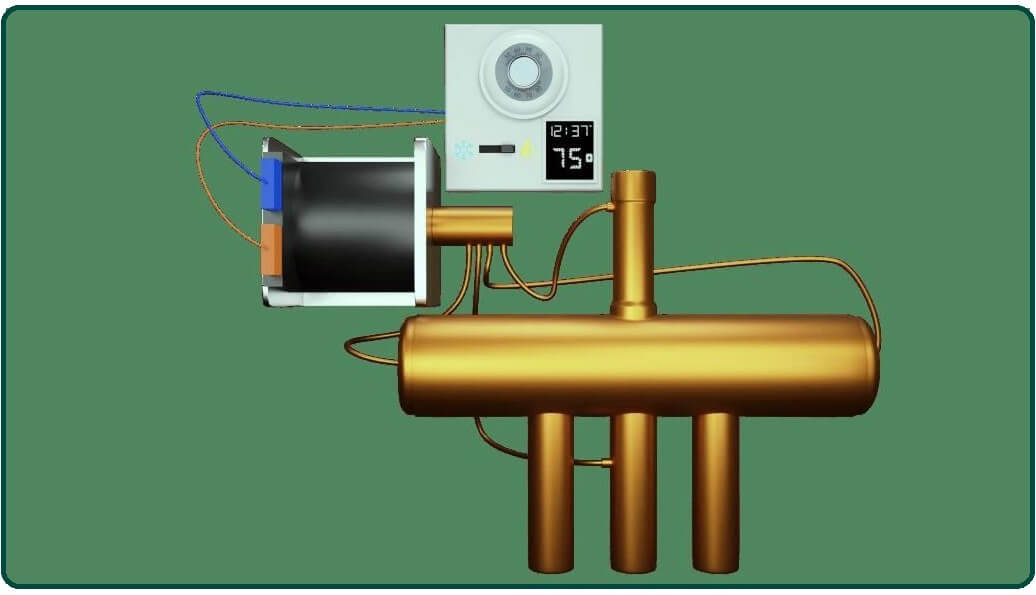 An electromagnetic solenoid allows the valve slide to move & switch operation modes. This solenoid is usually connected to the thermostats controlled by two wires: a blue (common) wire that goes to one side and an orange wire to the other. With that wire configuration, systems can use the orange wire to activate the reversing valve in cooling mode. 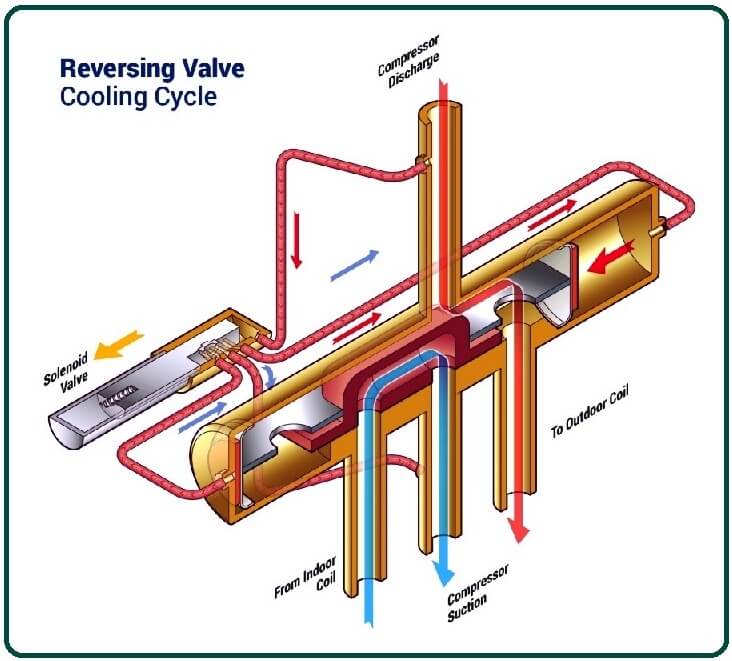 The electromagnetics solenoid does not directly cause slides to move & reverse the refrigerant flow. It serves only as of the first falling domino in a short series of actions. The solenoid is connected to a pilot valve, which acts like a mini reversing valve allowing the slide to move.

You can see these in actions by looking at the sequence of little red arrows in the image below. Systems are in cooling mode as the pressure differentials are on the right and have pushed the slide up from its positions in the previous cutaway images. However, the pilots’ valve itself does not create a pressure difference.

The compressor creates a pressure difference when it pumps steam. If you have weak or faulty compressors, it may not be creating a strong enough pressure difference to effectively switch between heating and cooling modes. Look at the normal discharge line in the image above. The red arrows go into it, but they also go to the pilot valves.

They flow through the pilot’s valve & create a pressure difference that pushes the slide to the right. If the vapor pressure in the discharge line is too low, it may not be strong enough to push the slides in either direction. Since the reversing valve requires a pressure difference to switch operating modes, the reversing valve may not function when the system has no power for a while. However, it may still slide and change modes if you have just turned the unit off. 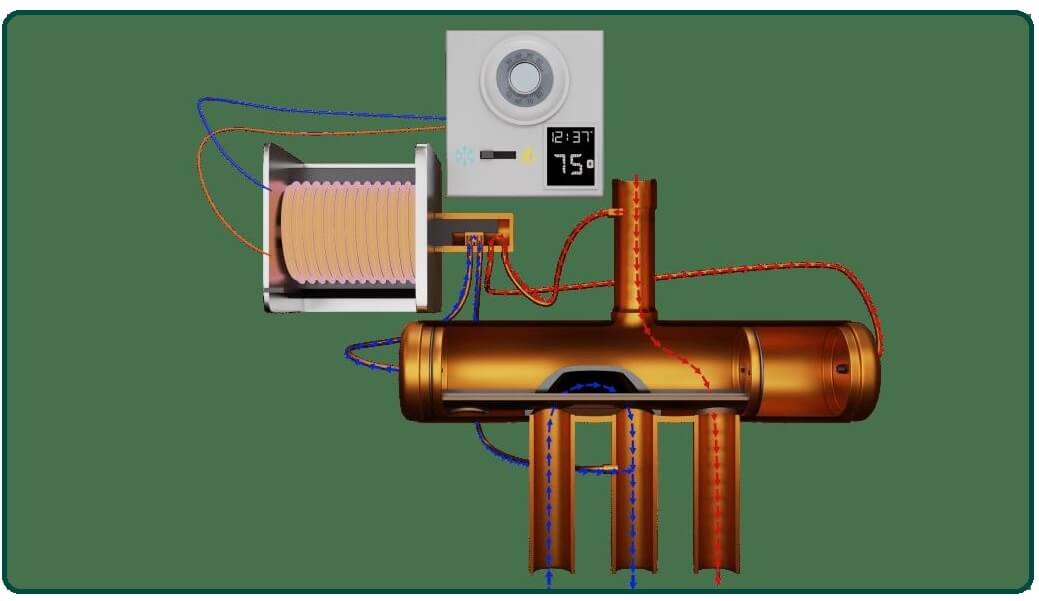 When you can identify a normal discharge line and a normal suction line, it becomes easier to keep track of them.

Normal discharge and suction lines shall always be used for either discharge or exclusively suction. They do not change their function regardless of the mode of operation. The normal discharge line always runs from the compressor to the side of the valve.

It is usually at the top but not always. The common suction lines are the middle line at the bottom of the reversing valve. No matter what the operating mode, the suction line will always lead to the compressor. The two lines next to the normal suction line can switch between discharge & suction.

Their functions depend on how the reversing valve routes the refrigerants. Canoes loop the suction line back to any of the surrounding lines. Check out the bottom line of blue arrows in the image below to see it in action. Systems are in the cooling mode because the pressure differential is on the right.

Finally, just remember that reversing valves work by changing the path of the refrigerant. The solenoid does not directly cause the pressure difference that makes the change possible, but it does set the process in motion. The active solenoid moves the pilot valve, which opens the way for high-pressure steam to flow to one side or the other of the slide.

The reversing valves on heat pumps can change the direction of coolant flow through the electromagnet. This electros-mechanical device is valves that are activated when electrocuted. When activated, the valve opens, allowing the refrigerant to pass through.

This will lead to the cooling mode of the heat pumps. When valves are de-energized, they close, blocking the flows of refrigerants. At this time, the heat pump will be in its heating mode. Heat pump reversing valves have four capillary tubes, which are called four-way valves. An electric coil, electric magnet, spring, slider, and block are also mounted on the reversing valve. 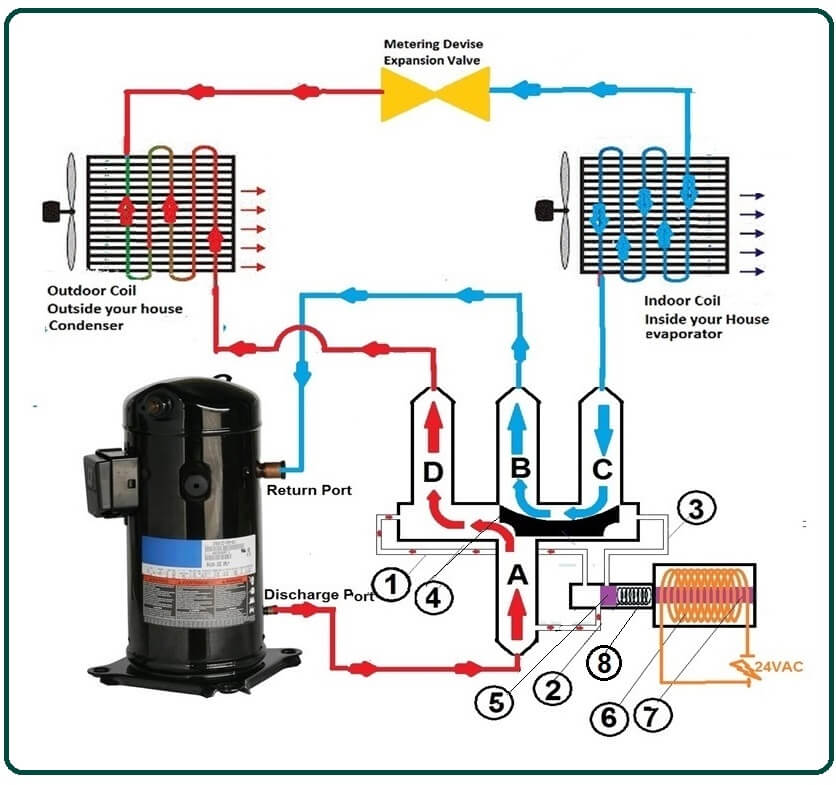 Now, when the electric coil is energized for the cooling mode of the heat pump, it will activate the block pulling magnet on the capillary tube 3, resulting in compression of the spring. At this point, capillary tube two attached to high-pressure tube A connects to capillary tube 1.

This pushes the slider to the right, allowing high-pressure refrigerant flow from tube A to tube D. to the outer coil, then to the indoor, and then from tube C to tube B and back. 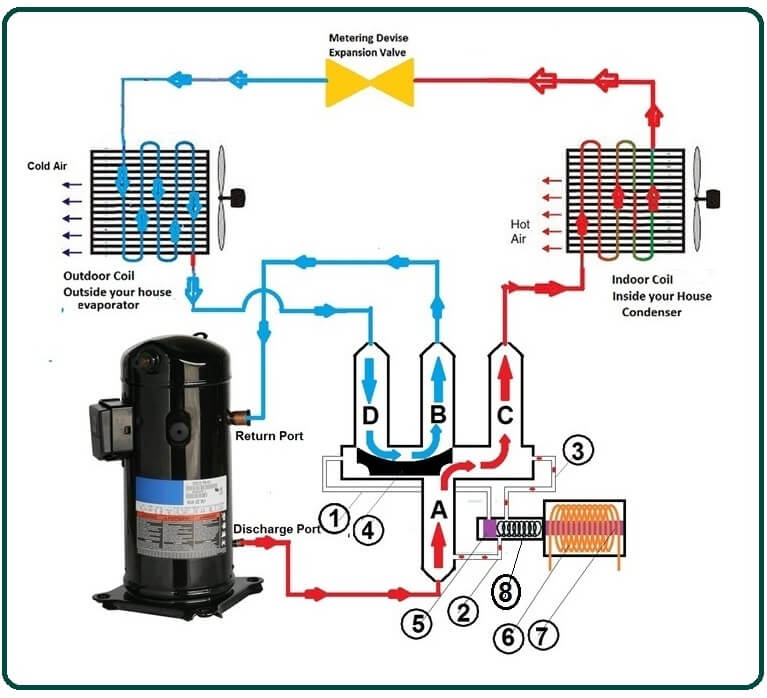 De-energized Heat Pump Reversing Valve – Heating Mode When the heat pump reversing valve is de-energized during the pump’s heating mode, the spring will decompress, this time is pushing the block towards blocking capillary tube 1.

The high-pressure refrigerant will flow from capillary tube 2 to capillary tube 3; pushing the slider to the left moves the refrigerant from tube A to tube C, which moves it up the inner coil to the inner and then the outer coil. Then tube D, and finally tube B, which carries the flow to the compressor’s return port. 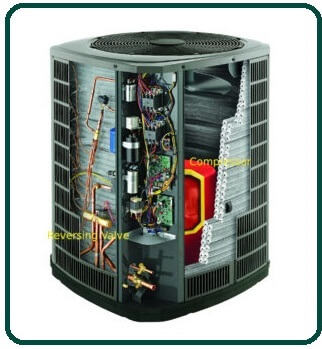 The heat pump reversing valves are most likely placed near the compressor. The following image shows the location of this device on the heat pump.

We know by now that dual use of heat pumps for cooling & heating is possible only because of the heat pumps reversing valve. However, this component can also be prone to damage.

Regardless of the damage, it may need a replacement, but there are also cases when you can fix what’s wrong with this device. When one intends to fix a problem with a reversing valve, the important point is to know when there is a problem and how it can be fixed.

There are signs that indicate that the fault has been raised due to a problem with the heat pump reversing valve. The following signs indicate when the problem is with the reversing valve, and if such problems are not found, you should check other parts to locate the source of the problem.

One of the common problems that can occur with a heat pump reversing valve is that it becomes stuck. When the device doesn’t seem to alternate between cooling and heating, the problem most likely lies with the reversing valve.

One of the reasons for these problems is that the valve is stuck due to dirt somewhere in the device. A few taps on the device with a plastic object should do the trick to free the valve. You may also need to clean the capillary tubes.

Some physical damage, such as burn points, oxidation, holes, etc., can also be the reason for the valve getting stuck. A replacement may be required in such cases.

When the coil does not function properly, it cannot activate the valve correctly. When the solenoid voltage is not as high as it should be, most likely, the coil is faulty, and needs to be replaced.

Even if the voltage is just the right amount, you need to make sure that it is a magnetic field that has actuated the valve. If it is not magnetically actuated, it is due to the disconnection of the wire connecting the electrical part of the valve to the solenoid. If the problem still exists, it is better that you consider replacing it.

When the refrigeration system is not working properly, one possible reason could be that there is no correct refrigerant charge in the system, and this could cause the heat pump reversing valve to malfunction. If the heat pump shows no signs of leaking, the problem lies within the compressor or reversing valve.

If there is leaking with the compressor, there will be some noise from the compressor, and when nothing like this is seen, the problem is in the reversing valve. This means that the heat pump reversing valve is missing some cooling agent, which reduces the heating or cooling performance, as well as causes the device to become stuck.

The reversing valves on heat pumps can change the direction of coolant flow through the electromagnet. This electros-mechanical device is valves that are activated when electrocuted.

A reversing valve is a type of valve and is a component in a heat pump, that changes the direction of refrigerant flow. By reversing the flow of refrigerant, the heat pump refrigeration cycle is changed from cooling to heating or vice versa

The most common reason for a reversing valve getting stuck is due to a bad solenoid. The solenoid is responsible for switching the process from heating to cooling and vice versa. A broken solenoid is not going to be able to switch from one mode to the other, essentially causing your reversing valve to get stuck.

In a heat pump, a reversing valve controls the direction of flow of the refrigerant. A refrigerant is a chemical mixture that allows heat exchange to occur. If the refrigerant flows in a different direction, it causes a switch in the function of the indoor and outdoor coils, and it changes whether heat leaves or enters your home.