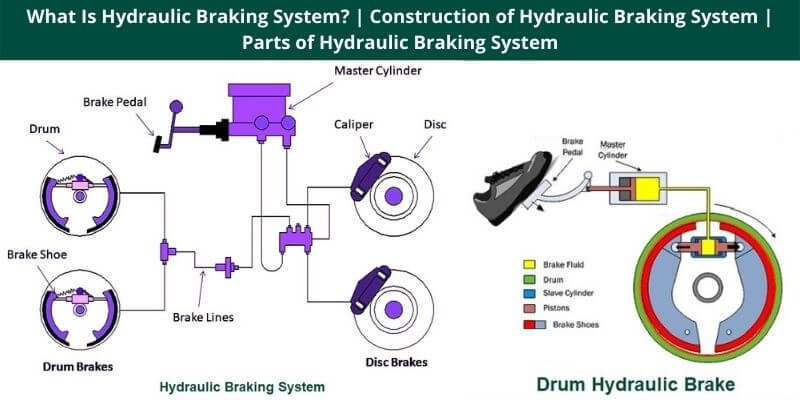 What Is Hydraulic Braking System? 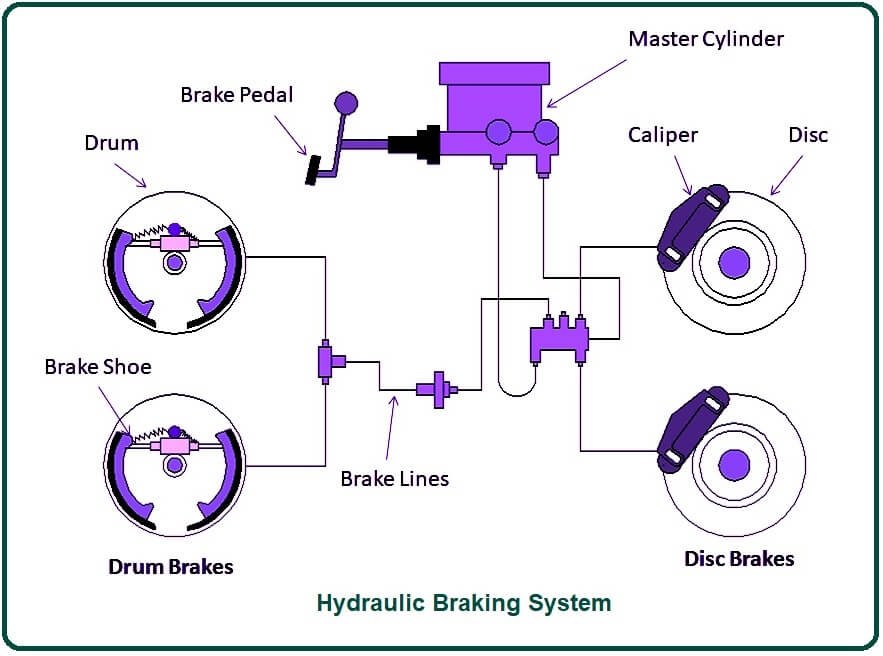 A hydraulic brakes system is a braking mechanism that uses brake fluid to transmit force into the system. The fluid transfers pressure from the control mechanism to the braking mechanism. Hydraulic braking systems are widely used in low-speed four-wheelers such as the Tata Ace. It works with the drum type, while the disc type is used in almost all cars.

The construction of hydraulic braking systems involves the following part arrangement. Brake pedal or level, a wreath, also known as an actuating rod, a master cylinder assembly is carrying a piston assembly. It is composed of one or two pistons, a return spring, a series of gasket or O rings, and a fluid reservoir.

The construction of hydraulic braking systems consists of reinforced hydraulic lines, & the brake caliper assembly consists of one or two hollows aluminum or chrome-plated steels piston. This is known as the caliper piston.

A thermally conductive brake is a set of pads and rotors, also known as a brake disc or drum attached to an axle. A glycol-ether-based brake fluid filled the system to force the four wheels. However, other liquids may also be employed. Suddenly, manufacturers start designing passenger vehicles with drum brakes on four wheels.

Traditionally, disc brakes are used in the front wheel, while drum brakes are employed for the rear wheel. Disc brakes have better heat dissipation & greater resistance to fading and are safer than drum brakes. This is why four-wheel disc brakes have increased significantly over the year. In addition, hydraulic brake pedals provide faster and more consistent pad return upon release.

It is the main part of the entire assembly. It acts as a hydraulic actuator with a piston-cylinder arrangement. It is responsible for converting mechanical force into hydraulic force.

Fluid is compressed and pressurized into the master cylinder as a brake pedal that is transmitted to the brake assembly via hydraulic lines.

The brake pedal acts as the input of the master cylinder, or we can say that the entire assembly will start working when the brake pedal is pressed. It is manually pressed when we have to stop or slow down the running body.

It is like a small tank for braking fluid. It is directly connected to the master cylinder for proper handling of hydraulic braking. It is necessary to maintain the exact amount of braking fluid throughout the assembly.

Hydraulic lines are the relationships between the various components of a braking system. Braking fluid passes through these lines from the master cylinder to the brake.

In the case of brake brakes, brake calipers are parts of the braking system that performs the brakes. Inside the brake calipers, pistons are placed, which are responsible for braking. Brake pads are also attached to pistons.

Calipers are placed on the circumference of the disc. The disc brake is an externally applied braking system. A disc is placed between the calipers.

A drum cylinder is a type of small cylinder that is used in drum brakes, and the brake is located inside the drum and is connected to both brake shoes. The drum brake is an internally applied brake.

The work of the hydraulic braking system is very simple. To execute the brakes, we have two types of components: a disc brake and a drum brake. The initial work is the same for both types, but the execution technique is different. Disc brakes are an externally applied brake through the brake calipers and discs, while drum brakes are applied internally through brake shoes and brake drums.

The working of both the types is as follows:- 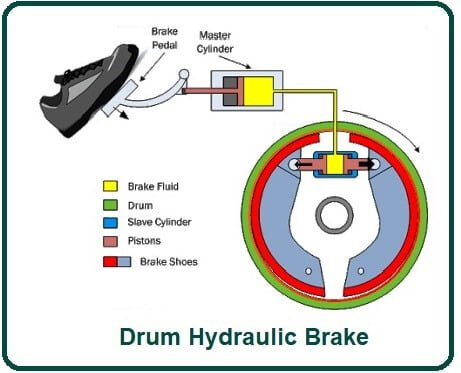 When this high-pressure brake fluid o enters the wheel cylinder or drum cylinder due to its high pressure, there is movement in the cylinder piston, which in turn expands the static brake shoe attached to it.

Due to the expansion of the brake shoe, a friction contact is formed between the brake shoes and the drum lining (rotating drum part), which in turn converts the kinetic energy of the vehicle into heat energy & finally braking. 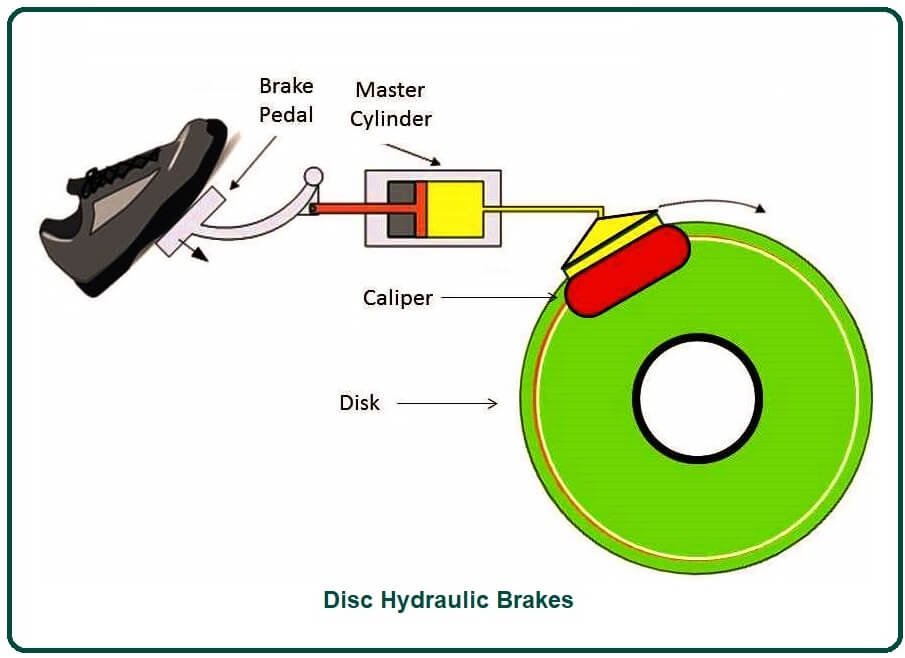 This high-pressure brake fluid causes motion in the piston of the caliper cylinder, which in turn causes the speed of the brake pads attached to the piston inside the caliper. Due to this movement of the brake pads, there is the clamping of the rotating disc rotor, and due to this frictionless contact between the brake pads and the rotating disc rotor, the kinetic energy of the vehicles are converted into heat energy, which in turn would be stopped, or de is. Accelerate the vehicle.

Single Acting Disc Type Braking – The function of single-acting disc type hydraulic braking is exactly the same as mentioned above; this type of braking provides a single braking force in the single wheel or single pair wheels.