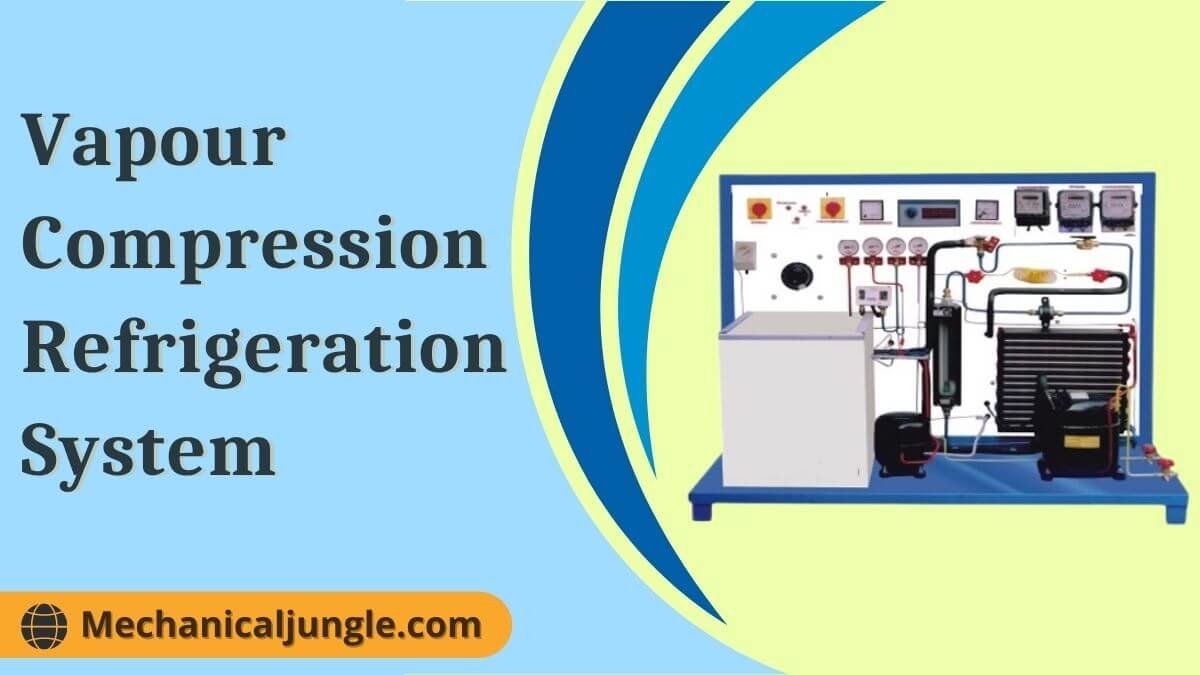 What Is Vapour Compression Refrigeration System? 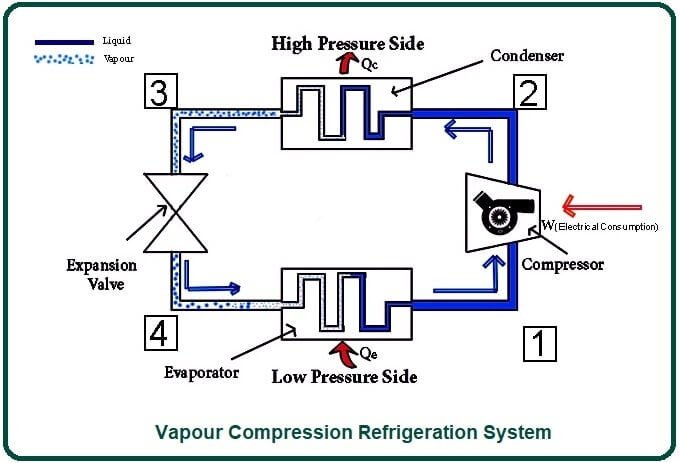 In this system, the phase of the working fluid changes twice from liquid to Vapour and again from Vapour to liquid. Refrigerant is achieved in this type of system because refrigerant evaporates at low temperatures providing cooling effects.

The actual Vapour compression cycles are based on the Evans – Perkins cycle, also known as the reverse Rankin cycle.

During evaporations, it absorbs heat from the cold body and is used as its latent heat to convert this heat from the liquid to vapor, while in condensing or cooling, it rejects heat to external bodies Gives, thus creating a cooling effect in the working fluid.

All components of the Vapour compression refrigeration system are connected via a pipe. The detailed explanation of the above parts is as follows.

This high pressure and temperature vapor refrigerant are discharged through the discharge valve into the condenser.

The condenser or cooler consists of pipe coils in which the high pressure and temperature Vapour refrigerant are cooled and condensed.

When passing through the condenser, the refrigerant releases its latent heat to the surrounding condensing medium, usually air or water.

The condensed liquid refrigerant from the condensers is deposited in a vessel known as the receiver, from where it is supplied to the evaporators via an expansion valve.

It is also called a throttle valve. Its functions are to allow the liquid refrigerant to pass through high pressures and temperatures, where it reduces its temperature and pressure. 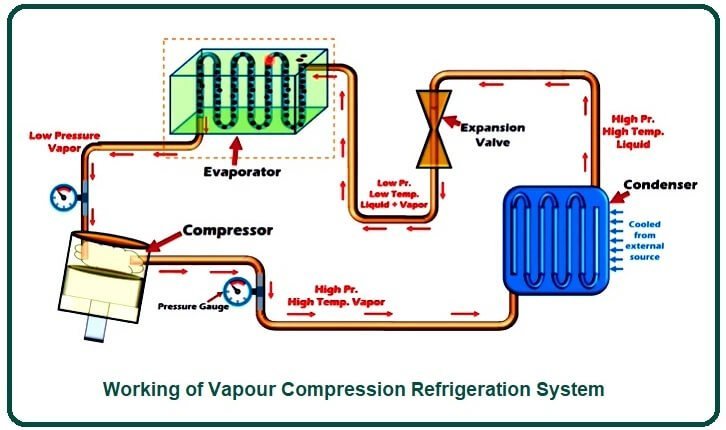 There are four steps involved in working of the Vapour compression refrigeration system:

After entering the condensers, the superheated Vapour will be converted into a liquid as heats are extracted from the Vapour. These are called saturated liquids. After that, this liquid goes to expansion valves.

In the expansion valve, the pressure & temperature of the saturated liquid will decrease.

After that, this low temperature & pressure liquid will be transferred to the evaporator.

The fan present near the evaporators will supply warm air, & on another side, we will get cold air. After that, this Vapour will go to the compressor again, & this cyclic process will be repeated again and again.

Applying Steady Flow Energy Equations (SFEE) at Evaporator, we get

Applying Steady Flow Energy Equations (SFEE) at Compressor, we get

Applying Steady Flow Energy Equations (SFEE) at Condenser, we get

Some problems in a Vapour compression refrigeration system that may affect the efficiency of the system are:

Compressor leakage or failures are a major in vapor compression refrigeration systems.

Compressor failure can cost the company too much if the compressor fails within the warranty period. It also affects the reputation of a company.

Some problems that can cause compressor failure are lubrication problems, slugging, overheating, and contamination.

Fouling is defined as the accumulations of unwanted deposited pipes of water and refrigerant transfer surface. The foulant layer imposes additional resistances to the flow of water or refrigerant.

The restriction in the thermostatic expansion valves is called fluid line restriction. This problem can reduce the cooling capacity by up to 50%.

Causes of a liquid line Restriction:-

Test to know if the problem is a liquid line Restriction:-

This is one of the most common problems in Vapour compression refrigeration systems. Due to this problem, the performance of the system decreases significantly.

Possible reasons for the cooling problem:-

The types of Vapour Compression Cycles which are essential from the subject point of view are as follows.

The Advantages of the Vapour Compression Refrigeration system are as follows.

The disadvantages of the Vapour Compression Refrigeration system are as follows.

The applications of the Vapour Compression Refrigeration system are as follows.

The compression refrigeration cycle consists of the circulation of a liquid refrigerant through four stages of a closed system. As the refrigerant moves through systems, it is alternately compressed and expanded, changing its state from liquid to vapor.

The vapor compression refrigeration cycle includes four components: compressor, condenser, expansion valve/throttle valve and evaporator. It is a compression process that aims to increase the pressure of the refrigerant as it flows through an evaporator.

Air conditioners also employ a vapor-compression cycle to cool the ambient air temperature in a room. Basically, vapor-compression refrigeration drives a heat engine backwards, so the heat energy is taken from a cold reservoir & stored in a hot reservoir.

The basic components of any refrigeration system operating on a vapor compression cycle are the compressor, condenser, expansion valve and evaporator, and refrigerant fluids that alternately vaporize and liquefy during the refrigeration cycle. In both cases, the operating principles are close. Heat is removed from the cold place to the hot spot. Given upper is a refrigeration cycle diagram.