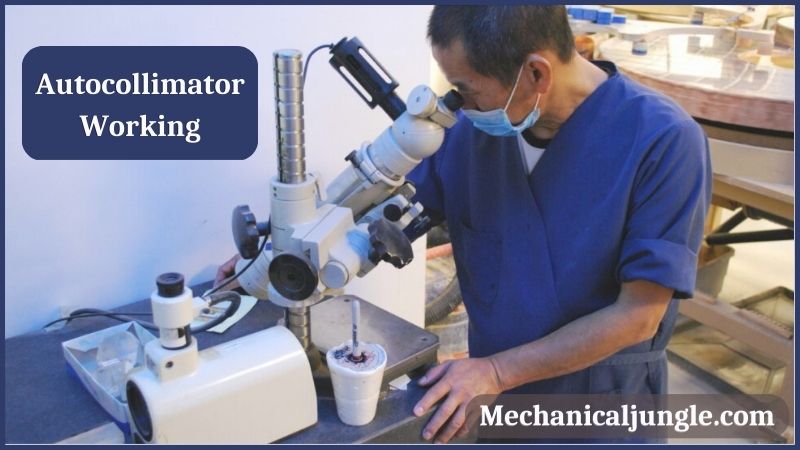 In actual practice, the work surface whose tilt is to be obtained forms the reflective surface, & the displacement x is measured by a precisions microscope that is directly calibrated to the tilt values of inclinationΘ. The optical system of the autocollimator is shown in fig.; the target wires are illuminated with an electric bulb and serve as a source of light because it is not convenient to visualize the reflected image of a point and then measure the displacement x properly.

After being reflected from the surfaces being measured, the image of the illuminated wire is formed in the same plane as the wire. The eyepiece system containing the micrometer microscope apparatus consists of a pair of setting lines, which can be used to measure the displacement of the image by setting it to the original cross lines and then moving over them to the image.

Typically, calibration is supplied with the instruments. thus, the angle of inclinations of the reflecting surface towards the micrometer scale can be read directly. Autocollimators are fairly accurate and can read up to 0.1 seconds, and can be used for distances of up to 30 meters.

What Is the Autocollimator Method?

It is basically a combination of an infinity telescope and a collider. Autocollators are mainly used to align optical components and measure the optical and mechanical deflection. 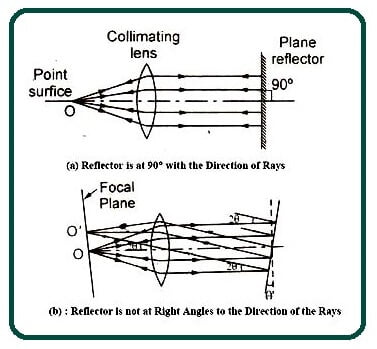 The two main principles used in autocollimators are (a) projection and refraction of a beam parallel to light by a lens (b) the change in the direction of the reflected angle on the plane is accompanied by a change in the angle of reflection of the surface.

To understand this, let us imagine a convergent lens with a point source of light o on our theory, as shown in fig.; a. When a beam of light strikes a flat reflective surface, one part of the beams is absorbed, and the other part is reflected back.

If the angle of incidence is zero, that is, incident rays fall perpendicular to the reflective surface, then the reflected rays reproduce the original path.

Thus, alternatively, if the incident rays are not at right angles to the reflective surface, they can be brought to the focal plane of the light sources, reflecting the reflecting plane at half the angle of reflection as shown in fig. b.

Now, from the diagram, oo’ = 2θ × f = x, where f is the focal length of the lens. Thus, by measurings, the linear distance x, the inclination of the reflecting surface θ can be determined.

The position of the final image does not depend upon the distance of the reflector from the lens. If, however, the reflector is moved too long, the reflected ray will then completely miss the lens, and no image will be formed.

Six parts of the autocollimator:-

the light source is used to generate the light rays so that it reaches the reflectors.

it is the surfaces that act as a workpiece for the autocollimators. Using the autocollimator, the angles of tilt of this reflecting surface is to be measured. It reflects the parallels of light rays coming through an objective lens.

the diverging lens, which is also knowns as the objective lens, is used to parallelize the light rays coming through the beam’s splitter so that parallel light rays reach the reflectors.

the beam splitter is used to split the light rays and direct them towards the objective lens.

The light rays, after getting reflected, reached this target graticule, and the distance between the incident & reflected ray is traced in this target’s graticules.

it is used to see points of incidents and reflected rays in the target graticules clearly and measure the distance between them.

In autocollimators, the reflective surface is the surface whose inclination is to be measured using this instrument. The distance between the source of light & the reflected ray in the focal plane is measured using a micrometer microscope.

First, the light source is illuminated, & the rays of the light line are extracted from the intersection points of the cross-line target gratitude, which is placed in the focal plane of the objective lens. After that, the beam of the beam reaches the beam splitter, and the v-ray beam is the gate that will direct the light rays towards the objective lens.

Now there can be two cases:

Case 1: The reflector is perpendicular to the ray of light.

Case 2: The reflector is tilted at some angle.

In the digital autocollimator, micrometer adjustment is provided for the setting, but the coincidence of setting the static and target image is detected photo-electrically. This autocollimator is used in the lab. It has very high precision, provides real-time measurement, and is very user friendly.

Here, the different Applications of autocollimators are as follows

Here, the different Advantages of autocollimator are as follows

Here, the different Disadvantages of autocollimator are as follows

Autocollimators are optical instruments that measure angular displacements with high sensitivity. They are used to align optical components and measure optical and mechanical deflections. Autocollimators consist of a telescope and a collimator, a device that narrows a beam of particles or waves.